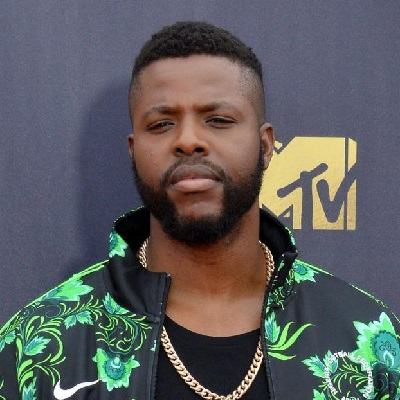 Winston Duke is one of the most eligible bachelors in the industry. However, Duke has already found the love of his life. Her girlfriend’s name is Michele Kumi Baer. Michele is an advocate by profession.

The couple started dating in 2015. As of now, they are leading a happy life with each other.

Who is Winston Duke?

Trinbagonian – American Winston Duke is a Black Reel Award-winning actor and producer. He is renowned as M’Baku of Black Panther and Avengers: Endgame.

Last, in 2020, he appeared in the movie, Spenser Confidential as Hawk.

Next, this actor will make his appearance in the movie, Heroine. Currently, the movie is at a stage of pre-production.

Winston Duke was born on the 15th of November 1986 in Argyle, Tobago. He is of Mixed (British, Irish, Polish, French) ethnicity.

His mother, Cora Pantin is a chef by profession. Also, she used to own a restaurant in Tobago. However, she sold the restaurant and moved to States in search of a better future for her children. At the time, he was only nine years old.

Till the date, Winston has not shared details on his father. Also, his father was never present during his upbringing.

He has an elder sister, Cindy. Cindy an infertility specialist as well as a reproductive endocrinologist.

Talking about his educational background, he completed his High School education in 2004 from Brighton High School in Rochester, New York.

After that, he earned his bachelor’s degree from the University at Buffalo with Honors in Arts and majored in theater. In 2013, he graduated from the Yale School of Drama with Honors in Fine Arts and Acting.

He started his professional acting career with the theater. At the time, he used to perform for the theater production companies like Portland Stage Company and Yale Repertory Theater.

He also starred the play, An Echo in the Bone along with the actress, Taromi Lourdes Joseph in his native land Trinidad and Tobago.

After graduating from Yale, Winston Duke expanded his career to Television with the series, Law & Order. However, he appeared in the series for a single episode only. The same year, he featured the series, Person of Interest. In the crime-drama, he appeared as Dominic.

Following the series, he made his appearance in the series like The Messengers, Major Crimes, and Modern Family.

However, his acting career got its first breakthrough with the movie, Black Panther. In the Marvel series, he portrayed the character of a powerful and ruthless warrior, M’Baku of the Jabari tribe. The movie had the box office collection of $1.347 billion whereas the budget was only $200 million.

The following year, he became a part of the epic multi-star movie, Avengers: Endgame. The same year, he appeared in the box buster horror movie, US. In the movie, he appeared in the lead character as Gabriel. In October 2019, he signed for the TV series, Swagger! Due to an injury, O’Shea Jackson Jr. replaced as Ike.

Last, in 2020, he featured Netflix’s comic-drama, Spenser Confidential as Hawk along with Mark Wahlberg.

As of 2020, he has an estimated net worth of $1 million. As an actor, his earnings are in the range of $21k to $215k. Besides that, he also makes through his production works too.

Winston Duke has black eyes with black hair. His height is 6 feet 5 inches and weighs around 108 kg with a mesomorph body type.

He prefers to have slightly grown facial hair.

Till the date, he has not involved in any type of controversy and scandals that created a buzz in the media. Also, he has maintained a distance from any kind of rumors too.