Wiz Khalifa is an American rapper who was part of the songs Black and Yellow, See You Again. He has multiple tattoos on his body. Wiz is currently dating a Canadian model. 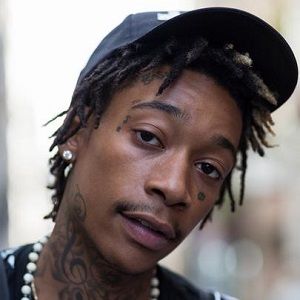 I don’t regret my past, I just regret the time I’ve wasted on the wrong people

I don’t chase after anyone, If you wanna walk out of my life, then I’ll hold the door open for you.

What you put up with you end up with. You can only expect what you accept from people.

Wiz Khalifa confirmed his relationship with Canadian model Winnie Harlow through Instagram. During 2018, they made their first appearance as a couple at Victoria’s Secret Fashion Show.

Previously, he was romantically linked to reality TV star, Natalie Nunn. During December 10, 2010, the duo was clicked getting cozy at a Pittsburgh club.

In December 2011, Wiz Khalifa and actress Draya Michele was rumored to be dating when they were seen leaving nightclub together.

Then, after getting separated from Natalie, Wiz Khalifa found a new love in the American model, Amber Rose. The rumors of their dating arose when they started tweeting each other on Twitter. Likely, the couple engaged on March 1, 2012, and married on July 8, 2013. Then, the couple has a son named Sebastian Taylor Thomaz. The couple split on September 22, 2014, and this split was bitter.

Who is Wiz Khalifa?

Wiz Khalifa is an American rapper, singer, songwriter, actor and he has become an icon within the cannabis community. After partnering with Colorado-based RiverRock Cannabis in 2016 He released his debut album, Show and Prove, in 2006, and signed to Warner Bros. Records in 2007.

He also gained a lot of attention with his single number, Black and Yellow, which was his first song for the Atlantic. Whereas, his most famous song ‘See You Again’ was featured in the movie ‘Furious 7’.

Wiz Khalifa was born in Minot, North Dakota, the United States on  September 8, 1987, his real name is Cameron Jibril Thomaz. He is the son of Laurence Thomaz (father) and Peachie Wimbush (mother).

His parents were in the US military service. Born in a military family background, he spent his childhood in different countries including Germany, the United Kingdom, and Japan. Then finally settled in Pittsburgh, when he was 11 years old. His parents divorced when he was just 3 years old, hence he was raised by a single mother.

He attended the Taylor Allerdice High School located in Pittsburgh.

He contributed to the mixtapes of various upcoming artists in Pittsburgh got him some attention from the president of Rostrum Records, Benjy Grinberg. After going through a 7-month training, Khalifa released his first mix-tape. Additionally,  his first album, ‘Show and Prove’. This album was released in 2006.

Similarly, he also released his first album, Rolling Papers in March 2011 in association with Atlantic. The album reached the 2nd spot in the US Billboards top 200 lists.

In addition, ‘Work Hard Play Hard’ and ‘Remember You’ were the two singles from the album that made a huge success. Hence, Mannie Fresh produced Blacc Hollywood was his fifth album and it featured songs with Miley Cyrus and Juicy J.

He has an estimated net worth of around $45 million and he has accumulated that sum of money from his professional career.

There was a controversy that he was arrested in November 2010 for the use and possession of marijuana. However, he was also let off on a bail of $300K. This happened during his Waken Baken tour. Currently, he is far from rumors and controversies.

Wiz Khalifa stands with the perfect height of 6 feet 2 inches. He weighs 82 Kg. He has dark brown colored eyes and likely, black colored hair. He has inked his body with multiple tattoos.

Also, read the affair, salary, the net worth, controversy, and the bio of Kiari Cephus, Pras, Baby Bash
Reference: (Wikipedia)