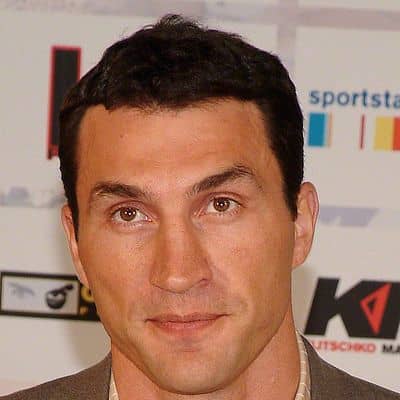 Is Wladimir Klitschko Single or Dating?

As per the sources, Wladimir Klitschko is currently single and is not dating anyone. Talking about his past relationships he has married and dated several ladies before.

Wladimir was married to a lady named, Aleksandra in 1996. Though, in 1998 they ended their union and separated while the reason behind their separation is still unknown.

He began dating Marina Hernandez at the end of 1999. They even went out together with a private airline pilot. Later in 2000, the duo were said to be living out together in Hamburg. But, there is no detailed info about their relationships.

Similarly, he hooked up with Diana Kovalchuk, a Ukrainian model in 2000. The couple attended several occasions together. They started spending time in New York City, together.  However, further info on their relationship is not revealed yet.

He started dating, Yvonne Catterfeld, a German singer and actress in 2007. The German press reported them to be attending several occasions together and getting cozy with each other.

Klitschko is reported to have dated, Alena Gerber, a German model, and actress at the end of 2008. Nonetheless, the actress was broken-hearted after, he took his interest in the actress, Hayden Panettiere.

He was engaged to the actress, Hayden Panettiere in October 2013. They hit off instantly during a party hosted by a mutual acquaintance according to the American media. Though, they are reported to be meeting for the first time in September 2009 by the German media during Klitschko’s brother’s match against Chris Arreola.

The couple was reported to be separated in May 2011, as they could not balance the long-distance relationship. Later, Hayden revealed her engagement to him in October 2013 and the couple together has a beautiful daughter named Kaya Evdokia Klitschko who was born in December 2014.

Again, They ended their union in August 2018.

Who is Wladimir Klitschko?

Wladimir Klitschko is a Ukrainian former professional boxer who dominated the ring from 1996 to 2017. He is the two-times heavyweight championship.

He has been honored with the unified WBA (Super), IBF, IBO, WBO, and Ring titles.

Wladimir Klitschko was born in Semipalatinsk, Kazakh SSR, Soviet Union on 25 March 1976. Klitschko is 46 years old as of 2022 and he holds Ukrainian nationality.

He is of European ethnicity and Pisces is his birth zodiac sign according to astrologers.Wladimir Wladimirowitsch Klitschko is his full birth name.

Vladimir Rodionovich Klitschko was his father who was a major general of the Soviet Air Force while Nadezhda Ulyanovna is his mother who was a flight attendant by the profession.

Moreover, he was brought up with his elder brother, Vitali Klitschko.

Talking about his educational life, He went to Pereyaslav-Khmelnytskyi Pedagogical Institute and completed his schooling.

Later, he graduated from the University of Kyiv, Ukraine with a Ph.D. in sports science.

While starting a professional career, In the late 1980s he began amateur boxing training at the Brovary Olympic Reserve School. He became the winner of the heavyweight division junior European championships in 1993.
Then, he placed second in the World Juniors in 1994. After giving blockbuster victory performances, he debuted on the world stage at the 1996 Summer Olympics in Atlanta against the opponent, Paea Wolfgramm.
This event earned him worldwide recognition and fame as he won the gold medal in Super-Heavy Weight.
His career in Ukraine began after he snatched the ‘WBO heavyweight title against American Chris Byrd in 200o. He kept defending himself and his title five times against Derrick Jefferson, Jameel McClaine, Frans Botha, Ray Mercer, and Charles Shufford.
With a technical knockout he again won over, Chris Byrd the ‘IBO’ and ‘IBF’ heavyweight titles in 2006. He went on to win the matches against Ray Austin and Lamon Brewster.
He challenged, David Haye, a ‘WBA’ title-holder for 2011 the ‘WBA’, the ‘IBF’, the ‘IBO’, ‘The Ring’, and the ‘WBO’ crowns. He won the fight with a unanimous decision from the judges.
In 2015, unfortunately, he lost over Tyson Fury during a ‘WBO’ mandatory challenger which was his first loss after more than a decade.
Though, their match was rescheduled but never happened because of the Fury’s medical condition. Later, In 2017, he lost the match against British boxer, Anthony Joshua by a technical knockout.
In  August 2017, he agreed to retire after two continuous defeats with a career of 64 wins from 69 bouts, with 53 knockouts holding the highest number of heavyweight title wins, and so on.
Achievements

Having a successful boxing career, Wladimir Klitschko has an accumulated net worth of around 90 Million USD as of 2022. He also has endorsement deals with renowned brands.

Wladimir Klitschko stays miles away from the unnecessary drama and the limelight. There he has not faced any rumors or controversies to date.

He is 6 feet 5 inches tall and weighs around 110 kg. His body dimensions are 47 inches chest size, 34 inches waist size, and 18 inches bicep size.

Klitschko is also named Dr.Steelhammer due to his strong wrist and punching power. Moreover, He has a shoe size of 14 (US).

Talking about his facial appearance, he has a couple of brown eyes and black-colored hair.

There is an official Facebook page under his which has garnered over 1.7 million followers.

Hayden Panettiere Opened Up About her Past Destructive Habits That Nearly Killed Her!