Updated On January 26, 2023 | Published By: Isha Shayak | In Death , Relationship
Share this 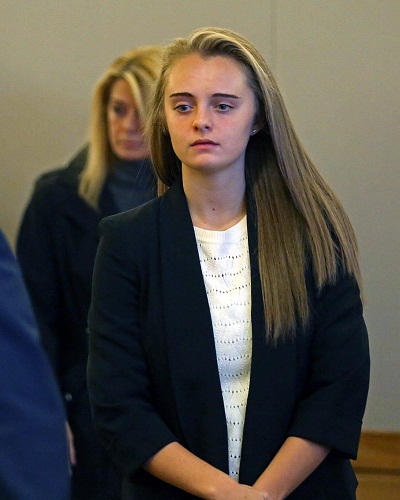 She faces up to 20 years in prison as she was charged as a youthful offender, which under state law allows her to be sentenced the same as an adult although she was a minor at the time of the crime.

Michelle Carter, 20, who encouraged her 18-year-old boyfriend — through text messages — to kill himself, was found guilty of involuntary manslaughter by a Massachusetts judge on Friday.

Conrad Roy killed himself on July 12, 2014, by inhaling carbon monoxide produced by a water pump in his truck. The teen who had a history of mental illness and had previously attempted suicide got out of the truck because he was “scared,” but Carter texted him to “get back in,” according to text messages the two exchanged during the course of their relationship.

Carter waived her right to a jury trial, leaving her fate to be decided by Judge Lawrence Moniz. On Friday, Moniz returned a guilty verdict. Moniz said that Carter’s actions constituted “wanton and reckless conduct” when she instructed Roy to get back in his truck despite knowing that it was a toxic environment “inconsistent with human life.” He said that her conduct caused Roy’s death.

“She instructs Roy to get back in the truck knowing of all the feelings he has exchanged with her; his ambiguities, his fears, his concerns. This court finds that by instructing Mr. Roy to get back in the truck constitutes wanton and reckless conduct by Ms. Carter, creating a situation where there is a high degree of likelihood that substantial harm would result to Mr. Roy.”

Moniz said that Carter — in her text messages to friends — admitted that “she did nothing” to save Roy. He said that she did not call the police, or his family, despite knowing his location.

“She did not issue a simple additional instruction, ‘Get out of the truck,‘”

Moniz did not revoke Carter’s bail and scheduled her sentencing for Aug. 3. She faces up to 20 years in prison for involuntary manslaughter.

‘You need to do it’: Michelle Carter

Carter, now 20, was 17 years old when Roy was found dead, on July 13, 2014. She was indicted for involuntary manslaughter in his death in February 2015, after authorities discovered numerous text messages between her and Roy before his suicide.

Those messages, as well as calls between the pair, showed that Carter encouraged Roy’s plan to kill himself — even when he was wavering. For example, in the days before his death, she texted him,

“You’re ready and prepared. All you have to do is turn the generator on and you [will] be free and happy. No more pushing it, no more waiting.”

After Roy’s body was found, Carter texted a friend to confess. She wrote,

“I could have stopped it,”

“I was on the phone with him and he got out of the car because it was working and he got scared and I [expletive] told him to get back in.”

Prosecutors had argued that through text messages and phone calls, Carter, 17 at the time, pressured Roy to kill himself, instructed him as to when and how to do it, assuaged his concerns over killing himself, and chastised him when he delayed doing so.

They said that Carter used Roy as a “pawn in her sick game of life and death” and wanted to be “the grieving girlfriend“ to gain her peers’ attention and sympathy, which she always craved.

Carter’s defense team said that Roy was “suicidal” over a long period of time and that he “was on this path to take his own life for years.” Moniz said on Friday that it was “irrelevant” to the court whether Carter would have taken his life “at another time.”

Carter’s lawyers had also argued that since Carter was 30 miles away when Roy killed himself, she was not the cause of his death. They said his death was a suicide, not a homicide.

A controversial psychiatrist, Dr. Peter Breggin, testified Monday that Carter was “involuntarily intoxicated” by antidepressants, which made her “delusional” and “grandiose.”

Breggin said Carter thought she was “doing a good thing” by encouraging Roy to kill himself. Carter’s lawyers had also said that she had her own “mental health issues” at the time of Roy’s death and was “overwhelmed” by the relationship.

In a brief statement after the verdict, Roy’s father said he was thankful to the judge and the prosecution team.

“This has been a very tough time for our family and we’d like to process this verdict that we’re happy with,” he said.

“Although we are very pleased with the verdict today, in reality, there are no winners here today,“

Assistant District Attorney Katie Rayburn said at a press conference after the verdict.

“We fully understand that this was a unique case that dealt with a lot of important issues in our society today,” Rayburn said. “But in the end, it was really about one young man and one young woman who were brought together by tragic circumstances.”