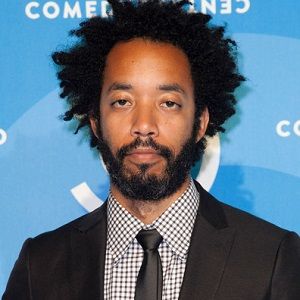 God's got his hands in a lot of human pies.

I make jokes. That's what I do.

The relationship status of Cenac is single. He seems to be more focused in his career than in his personal life. For Cenac work comes first. He has not been in any affairs previously.

Who is Wyatt Cenac?

Wyatt Cenac is an American comedian, actor, and a writer. He was a writer for The Daily Show from 2008 to 2012.  He worked as a writer for King of the Hill for three seasons. Apparently, he is known for The Daily Show(1996), Medicine for Melancholy (2008) and People of Earth(2016). Currently, he is running a television show called TBS series People of Earth.

Cenac was born on April 19, 1976, in Manhattan. He spent his infancy in the Bronx with his parents. His birth name is Wyatt Cenac itself.

His father’s name was Wyatt Cenac Sr. He was a cab driver. Cenac’s mother’s name is still unknown. Cenac’s father was shot by a teenager in the cab. Cenac then lived with his stepfather and mother in Dallas. Cenac was raised up in New York. He is an American by nationality. He used to spend most of his time with his grandmother in Brooklyn.

Cenac graduated from the Jesuit College Preparatory School of Dallas. Then he got his degree from the University of North Carolina at Chapel Hill. After completing his degree he shifted to Los Angles.

In 2008 Cenac was hired as a writer on The Daily Show with Jon Stewart. He made several appearances as a comedian along with other persons. In October 2009, he worked with rapper Slim Thug on the music video “Still a Boss”, a satire of how the collapse is affecting the rap community.

Cenac also worked as a costar in Medicine for Melancholy a drama by Barry Jenkins. In 2016 Cenac released his stand up album “Furry Dumb Fighter”. Cenac also worked in various short films and television series. Today Cenac is known as a famous standup comedian and a writer.

Wyatt Cenac’s career so far has been fruitful. Cenac has won many awards in his career. In 2009 he won his first award for best ‘Outstanding Writing for a Variety, Music or Comedy Series’. Likewise in 2011, he won the ‘Primetime Emmy Awards’. Again in 2012, he won the Primetime Awards for the third time.

Cenac was also nominated for the Grammy’s in the category of best comedy album but he didn’t win. He was nominated four times for TV awards in WGA TV awards and he won two awards out of four.

Wyatt Cenac: Salary and Net Worth

Cenac’s net worth is estimated around $400k. His monthly and yearly salary is still under review.

It is rumored that Cenac is an African from his mother’s side and French from his father’s side. Some reports say that when Cenac traced his parental lineage he found that a French officer who served on a French battleship during the Napoleonic Wars, who went on to get married to an African woman in St. Lucia afterward.

Wyatt Cenac has a quite good height of 5’10”. He has curly brown hair and brown eyes. He has a slim body with tattoos on both arms. His weight and shoe size are unknown.