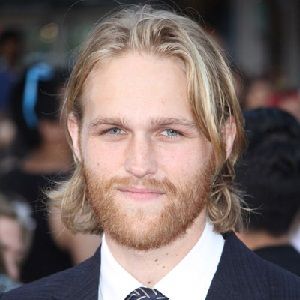 I got hurt when I was 19. They thought I broke my neck. I couldn't move my hands or feet, and I had a very bad experience.

I would consider my dad a pretty patient guy, but there was no tolerance for spoiled behavior.

In hockey, there are no second chances, but the great thing about acting is that there actually are. If you do a scene and you think you can do better - take two!

Handsome and the blue-eyed boy, Wyatt Russell is married to an actress Meredith Hagner on 2nd September 2019. They were engaged in Colorado in Dec 2018. Currently, he revealed that his wife Meredith is pregnant with their first child.

Previously, he was a married man. After being in a relationship with stylist Sanne Hamers for several years, they got married in 2014. This couple separated on March 2, 2015, and got divorced in 2017.

Who is Wyatt Russell?

Wyatt Russell is an American actor. He is also well known as a former professional ice hockey player. He is extremely prominent for “Law & Order: LA” (2010), “Arrested Development” (2013), “Table 19” (2017), “Goon: Last of the Enforcers” (2017). He is a hardworking person and has made a recognizable position in American film and T.V industry.

Wyatt Russel was born to Kurt Russell, actor, and Goldie Hawn on July 10, 1986, in Los Angeles, California, U.S.A. His nationality is American and belongs to Mixed (English, German, Scottish, and Irish) ethnicity. He is a grandson of actor Bing Russell.

He was raised up with his parents in a sporty and entertaining environment. Being a son and grandson of actors, he was highly interested in the acting and sports field from a very early age. His parents were the strong pole for him and they were with him in every difficulty and supported him in pursuing a career in the acting field.

Concerning educational background, he attended the University of Alabama in Huntsville. While in University, he was the backup goalie for the UAH hockey team.

He also played for another several hockey teams including Richmond Sockeyes, Langley Hornets, Coquitlam Express, Chicago Steel, Brampton Capitals, etc. Wyatt made his debut in 1996 film “Escape from L.A.” as Orphan Boy. Being a son of a well-known actor, he got a role in the different film including “Soldier” (1998), “Soldier” (1998), etc. Some of his other popular films include “22 Jump Street” (2014), “Everybody Wants Some!!” (2016), and “Cowboys & Aliens” (2011).

His estimated net worth is $4 Million. Regarding his salary and other incomes, they are under review.

Despite being a son of a popular actor and himself as a recognizable actor, there are no desperate rumors regarding Wyatt’s personal and professional life. In 2015, there were rumors related to his parents that they are going to get married after 30 years.

Wyatt Russell is tall with a height of 6 feet and 2 inches. His weight is 80 kg. He has blond hair and blue eyes.