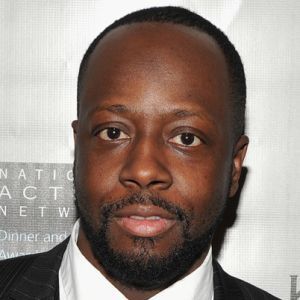 I feel that life is short, so we should be disciplined, but at the same time we should have a good time: At the end of the day, just know that God made you, so you can be your own individual, and don't let people give you that peer pressure: I lived in a hut with no roof, and I rode to school on a donkey. I used to shoot birds with a slingshot to cook for dinner. Now I prefer to get my food from KFC.

Wyclef Jean is a married man and has married with to fashion designer Marie Claudinette in 1994. They had mentioned that they were dating for quite some time before tying the knot.

The couple had adopted a daughter in 2005 whom they named Angelina Claudinelle Jean. The couple renewed their marriage vows in August 2009.

Earlier he had stayed in a relationship with former stripper and model Karrine Steffans. But they separated because of Steffans stated that his breath was stinky.

Additionally, he had also dated his Fugees groupmate Lauryn Hill. This relationship also not stayed long and they broke up. He had an affair with her while he was married to Marie.

Wyclef even occasionally hinted that he might be a father of her first child. However, Rohan Marley who is Lauryn’s first child’s actual father refuted these claims.

Who is Wyclef Jean?

Wyclef Jean is a rapper, musician as well as an actor. He belongs to Haitian society. His real name is Nel Ust Wyclef Jean. He is a member of the New Jersey hip-hop group the Fugees.

He had also won the title of  Grammy Awards for his musical work.

Wyclef  Jean was born on 17th October 1969 in Croix-des-Bouquets, Haiti. Then at the age of 9, he as well as his family had shifted to  Newark, New Jersey.

He was the son of father Reverend Gesner Jean and mother Yolanda Jean. He has two siblings named Blandinna Melky Jean and Farel Sedeck Guerschom Jean.

Besides this, he hasn’t mentioned any information about his birth facts and childhood.

Jean was graduated from Vailsburg High School, Newark, New Jersey. Then he had attended  Eastern Nazarene College where he had finished one semester at Five Towns College in New York.

He had also enrolled in the Berklee College of Music in 2009.

In the 1980s, Wyclef Jean had formed the group and signed with Ruffhouse Records and Columbia Records in 1993. The next year the group had released its first album Blunted on Reality and achieved limited commercial success.

In 1996, they had again released their second album titled The Score which also had achieved significant commercial success in the United States, topping the US Billboard 200. He had even announced to begin a solo career with Wyclef Jean Presents the Carnival Featuring the Refugee All-Stars in 1997.

He had released his first new solo album, The Ecleftic: 2 Sides II a Book in 2000. Likewise, he had released his second solo album  Masquerade in 2002, the third album  The Preacher’s Son in 2003 and his fourth solo album  Sak Pasé Presents: Welcome to Haïti in 2004. Similarly, he had also played in movies like Shottas in 2002, One Last Thing in 2005, and Americlef in 2007.

From the year 2004-2006, he had been fueled by a reunion performance in Dave Chappelle’s “Block Party. Later in 2006, he has featured in Shakira’s smash hit Hips Don’t Lie.

He was also featured on the song “Spanish Fly” with Ludacris and Bachata group Aventura included on Aventura’s album The Last, released in June 2009.

Similarly, in 2016, he had released a featured vocalist in The Knocks’ single “Kiss The Sky” and wrote an autobiography entitled Purpose: An Immigrant’s Story with the help of journalist Anthony Bozza, published on 2012.

In 2017, he had announced The Carnival Tour which was started in January 2018.

Wyclef Jean: Salary and Net Worth

He hasn’t mentioned his salary but his net worth is estimaed at $10 million.

Jean is a controversial person and has suffered from rumors as well as controversy. His recent activities tell us that he had charity a ‘cesspool of fraud and broken promises’ that has collapsed under a mountain of debt.

While moving towards his body measurements, Wyclef Jean has mentioned that his height is 180 cm and weight is 78kg. Besides this, he has mentioned his hair color which is black and has a dark brown eye.