Xolo Mariduena starred as the adopted kid from Parenthood, the Leg Sweeper from Cobra Kai and soon to be the Scarab Boy in Blue Beetle. 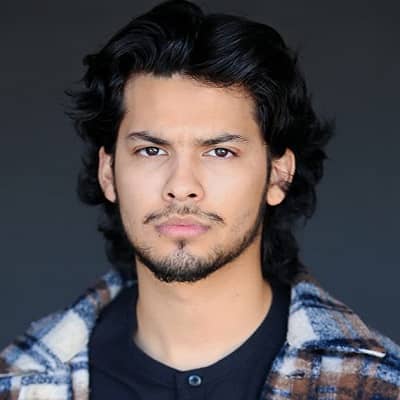 Xolo Mariduena is in a relationship with Hannah Kepple.

She has also cast on the Cobra Kai series. The duo first met on the set of the YouTube Premium series, became friends. And they started dating in early 2019. The couple also attended the prom together and celebrated his 18th birthday together on the 9th of June 2019.

Previously, the actor was rumored to be dating the Instagram model, Jayka Noelle. They were spotted together by the media.

Although the couple never addressed their relationship rumors.

Who is Xolo Mariduena?

Xolo Mariduena is one of the popular American actor and an Internet Sensation.

Xolo Mariduena is popular for playing the role of Miguel Diaz in the Netflix series Cobra Kai and as Victor Graham in the TV series Parenthood.

Xolo was born on June 9, 2001, in Los Angeles, California, U.S. He is of Hispanic ethnicity with Mexican, Cuban, and Ecuadorian descent. Similarly, his name means the ‘dog star’ in the Nahuatl language.

Moreover, he has a younger brother named Oshun Ramirez and an elder sister name Talia.

Mariduena was just three yrs old when he was part of the behind-the-scenes in the entertainment industry at a radio station studio. He grew up watching artists prepare and perform, which sparked his own interest in acting.

Mariduena has his schooling at Cathedral High School. Likely, he also has classes from Young Actors Space.

Mariduena started his career from the role of Victor Graham in the 2012 popular comedy-drama series Parenthood. Likely, the actor debuted in film in the year 2013, from a supporting role in Dealin with Idiots. The same year, he had a guest role in the police procedural series Major Crimes.

It was in 2016, he appeared in two other TV shows, namely, Mack & Moxy, and Rush Hour, and in the television film Furst Born. Then after he appeared in the first season of the famous series Twin Peaks in 2017.

Talking more, Mariduena appeared in the action-comedy drama series Cobra Kai in 2018. Its second season was also released in 2019, in which Mariduena reprised his role. The show has also been nominated for several awards.

And just in 2019, he was a voice actor for the supernatural mystery animated series ‘Victor and Valentino’. Moreover, he provided the voice for the sci-fi animated series Cleopatra in Space.

Likely, he received $45,000 per episode for his role in the web series Cobra Kai.

Mariduena is focusing on building his career and hasn’t engaged in any such controversial works as of now.

Talking about his appearance, he has black colored hair with dark brown colored eyes.

Likely, his official TikTok account also holds 581K followers with more than 5M likes. Moreover, he is also active on Twitch and has around 58K followers on his Twitch account.

You may also read the bio of Eddie Velez, Rebekah Asselstine, Rory Albanese, and Rachel Ticotin.