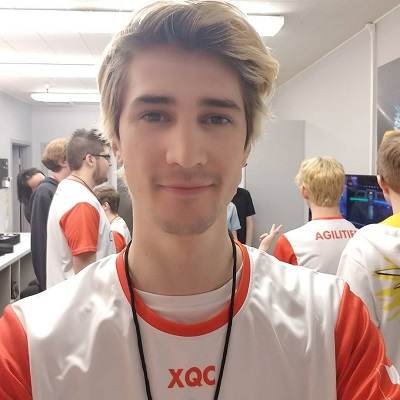 xQc’s current relationship status is possibly single. To date, he has not introduced anybody as his girlfriend or partner.

There is some news that claims that he is in a relationship with a fellow gamer named Adept. Despite the news, they have never confirmed their relationship.

Canadian xQc is Twitch Streamer, gamer, and internet personality. He is renowned for playing the multiplayer game, Overwatch.

Also, he played the Overwatch World Cup for Team Canada from 2017 to 2019. Currently, he streams on Twitch for the Canadian esports company, Luminosity Gaming.

xQc was born as Félix Lengyel on 12th November 1995 in Laval, Quebec, Canada. He is of French ethnicity.

He has not disclosed the name of his dad and mom. However, his father and mother have made their appearance on their YouTube channel. He has a brother, Nicolas.

His parents got separated from each other when he was just 1 year old. His parents shared custody of him and his brother after their separation. Since his childhood, he has developed a great sense of passion for games like skateboard, snowboard, trampolining, and video games.

Moving towards his academics, He completed his secondary education from the CEGEP and study humanities. Later, he switched to administration. However, he dropped out of school just before graduating.

In 2016, he discovered the game Overwatch and started playing it repetitively and competitively. After that, he started his gaming career as the main trank for the semi-professional esport company, Datzit Gaming. On 13th August 2016, he won the Dreamhack Montreal 2016 Overwatch tournament.

On 12th October 2016, he joined the Denial eSports as the main tank player. Moving forward, he and his other team member played together as YIKES! Later, they changed the name to Arc 6.

Moving forward, the team, Arc 6 played for the Beat Invitational: Season 2 tournament. Later, they broke the team and went their separate ways. Parting his way with the team, he joined the Overwatch franchise, Dallas Fuel.

The year, he represented Canada at the Overwatch World Cup. In the tournament, he was named as the most valued player. However, the team got defected defending champions, team South Korea.

In the 2018 Overwatch World Cup, he represented his country for Team Canda as the main tank. In the tournament, he managed to get quarterfinal only. The following year, he returned in the 2019 Overwatch World Cup but could not manage to pass the Group Stage.

Meanwhile, he played for the Dallas Fuel, GOATS, and Gladiators Legion. Currently, he streams on Twitch for Luminosity Gaming.

Besides Twitch, he is also extremely popular on YouTube where he plays games. Currently, he has 1.18 million subscribers with more than 429.8 million views.

Besides that, through his Twitch video, he makes in the range of $895k per video.

– On 31st July 2019, Twitch banned him for 72 hours for using satirically explicit videos using pornographic scenes due to safe for work.

– Once more, he got suspended from the platform for 24 hours for watching explicit contents where two gorillas were performing intercourse.

He has brown eyes with brunette hair. However, he has been changing his hair color from blonde to pink. He stands at a height of 6 feet 2 inches and weighs around 75 kg.

Talking about his appearance, he has a charming persona.