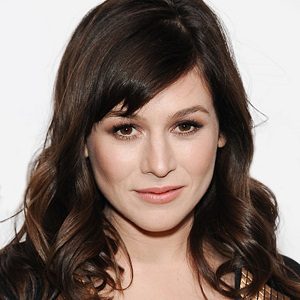 Prison makes an interesting context for so many different characters to come together. You get to see what lines get drawn between people.

Family hang-outs can go very late into the night and involve lots of music.

One thing that is not to be underestimated is American culture's influence on the rest of the world.

Stone was a married woman. In 2012, she married Australian actor Dan Spielman and lived in New York City. In July 2017, she reportedly announced her divorce with Dan. Their marriage had ended over a year ago.

She is currently in a relationship with Jack Manning-Bancroft, the founder of Indigenous mentoring program AIME. On 23 November 2017, the lovely couple announced they are expecting their first child. The actress also confirmed that she is under medical instruction to remain in Australia until the birth of her first child, expected in May.

The couple is keeping the sex of the baby a secret and is not planning to reveal it until the birth.

Who is Yael Stone?

Yael Stone is an Australian actress and TV personality. Moreover, she has won two Sydney Theatre Awards. Outside the Australian theatre, she is best known for her portrayal of Lorna Morello in the Netflix series Orange Is the New Black.

Yael Stone was born on March 6, 1985, in Sydney, Australia. Her ethnicity is mixed(Ashkenazi Jewish and English) and her nationality is Australian.

She grew up there. Yael’s mother, Judy Stone, was a nurse and her father Harry Stone was an architect. Harry Stone is from a Jewish family and was born in Czechoslovakia, to Holocaust survivor parents. Judy Stone converted to Judaism after she got married.

Yael is the youngest of three children. She has a brother and he is the former lead singer of the band named Bluejuice. Meanwhile, her sister Elana Stone also works in music the music industry.

Stone attended the Newtown High School of the Performing Arts and the National Institute of Dramatic Art (NIDA).

She has done remarkable work in television series as well. In 2001, her role was Young Sam Cooper in the miniseries The Farm. From 2007 to 2008, she appeared in 14 episodes of All Saints as Ann- Marie Preston. She starred as Linda, a supporting role, in 13 episodes of Spirited which aired on television during the years 2010 and 2011.

In December of 2011, she moved to New York and co-founded an experimental theatre company. After 4 months she was cast as Lorna Morello in the series Orange is the new black which first aired in the year 2013. Her role as Lorna Morello was a “breakout turn” for her. Her accent, a mixture of Brooklyn and Boston was called the “the most amazing accent on television” by The New Republic.

From 2010 to 2011, she played in The Diary of a Madman, a role for which she was the nominee for “Best Supporting Actress” at the Sydney Theatre Awards. In 2011, she had lead roles in A Golem Story, Summer of the Seventeenth Doll, and As You Like It in Sydney.

Yael Ston: Salary and Net Worth

Yael’s salary is unknown. But her hard work and determination have made her one of the TV’s best-paid actors.

As of 2017, Stone’s estimated Net Worth is 1.5 million dollars making her top 20 richest actresses.

In fact, Stone has not been a part of any drastic controversies or rumors.

Yael’s height is 5 feet (60 inches).  She has a slim body structure with beautiful dark brown hair and bright brown eyes. Her bra size is 32B and her shoe size is 8(US). Accordingly, her body measurement is 34- 25- 35 inches. Furthermore, her weight is currently unknown.

Yael Stone is actively connected with her fans through different social media. She has around 160.4k followers on Twitter, 954k followers on Instagram.