Yammy is a Youtuber who has over 2.4 million subscribers in her channel. She is married and a mother of one.

Yammy is a married woman. She is married to Kyle aka koil 1990. He is also a British Youtuber. He mostly posts videos playing Minecraft and Roblox.

He has around 82k subscribers and has gained over 4 million video views.

On 9 March 2015, Yammy confirmed on her Instagram account that she had a teenage pregnancy. The post showed a picture of her then boyfriend Kayle a.k.a Koil1990 holding a baby boy who was less than 6 months old at the time the picture was clicked.

The pair was not married at the time. Their son’s name is Dante and he is now 7-8 years old.

The couple exchanged wedding vows on December 4, 2017. They have now been married for over two years. 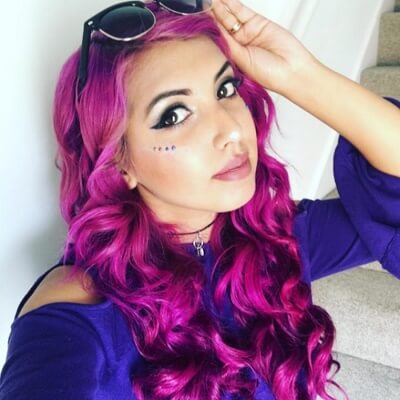 Yammy is a British Youtuber who has over 2.4 million subscribers on her channel. She is a gamer, vlogger, and blogger who primarily plays Minecraft.

Yammy was born as Yasmin Uddin on June 22, 1994, in West Yorkshire, England. As of 2022, her age is 28. There is very little information about her early life and family background. She has not revealed anything about her parents.

She wishes Mother’s Day to her mother several times through social media and seems to be close to her. Moreover, she has also said that her mother supported her as a pillar at the time of her pregnancy.

She has siblings; two brothers from her biological father and also a step-brother. She spent her childhood days in Leeds. Her ethnicity is English.

Yammy started her Youtube career by uploading gameplay videos on her channel to use as a journal. Although she enjoyed interacting with people, she has revealed that she turned to games in an attempt to phase out of reality.

In August 2015, her commentary and daunting moves received much attention from the popular Minecraft crew, the ‘Pixel Pact’.

When it comes to Minecraft, her channel is now one of the most tweeted ones. Before this, she wanted to play Minecraft and create a ‘Minecraft Eden’ as the ‘Eden Project’ which was her first single-player series.

Yammy is now well-known for her Minecraft series, Sims 4 series, Roblox, etc. She is best known for her Sims 4 100 Baby Challenge series which is now discontinued and her Episode/Choices series.

Sometimes, she also plays with her husband Kyle, LDShadowLady aka Lizzie, Scott aka Dangthatsalongname, Seapeekay aka Callum, SmallishBeans aka Joel, and Joey Graceffa.

She has also formed an all-female gaming group called the Pixel Pact. The Pixel Pact consisted of Vengelfe (aka Annie), LDShadowLady (aka Lizzie), Nyansai (formerly known as NyanStrike, Kat, or Kayurita), MittyMoxx (aka Mitty), in addition to affiliate members: Kaleidow (aka Ang) and Eleanora (aka Nora), LaurenzSide (aka Lauren).

As of June 2020, her channel has over 2.43 million subscribers and her total video views have crossed over 635 million.

Yammy is decently tall standing at a height of 5 feet 4 inches and weighs around 53 kg.

She has not revealed her body measurements for breasts, waist, and hips.

Her hair color is black and her eyes are brown but she likes to color her hair in different colors, mostly, pink.

Yammy has an estimated net worth of over $2.2 million as of 2022. She has earned a decent amount of money from her Youtube career.

With active subscribers and quality content, she earns a decent amount of money doing what she loves.

She has not been involved in any controversies. She has been able to keep herself away from any type of controversy and scandal.

You may also like to read the Bio, Career, Body Measurements, Net Worth, Social Media, Relationships, and more about Jackson Mecham(YouTuber), Kate Elizabeth(Youtuber), James Stauffer, and more.