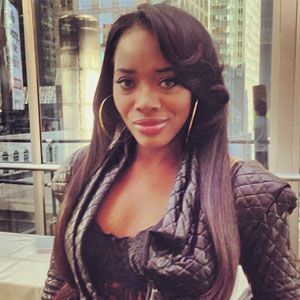 Yandy and Hip Hop star Mendeecees Harris were married on May 25, 2015 in true New York Style. The wedding was shown live on Vh1 channel.

Mendeecees Harris owns and manages a popular music studio called Beat Factory in the Bronx. Both Yandy and Harris are the cast of  VH1 reality series ‘Love and Hip Hop’.

The couple has two children, Omere Harris and Skylar Harris.

Who is Yandy Smith?

Yandy Smith is an American actress, producer, television personality, and entertainment manager. She is also the brand manager of the lifestyle brand ‘Everything Girls Love’. She is best-known for VH1 reality series Love and Hip Hop.

Similarly, Yandy Smith is also identified as an entrepreneur. In 2016, she released a guide eBook for entrepreneurs titled ‘The Beauty Of Branding In Business’.

She started her professional life as Executive Assistant for the Violator Management. Later she worked in a Managerial position for the rapper Jim Jones.

Yandy parents are father, Ralph Smith and mother Laura Smith of  African-American ethnicity. She has a brother named Juelz Santana.

And so Yandy completed her education from Howard University in Washington, D.C. with a degree in business management.

After University graduation at Howard, Yandy moved to California to pursuing her career. At first, she worked as an executive assistant for Violator Management. She used most of her earnings to repay her loan.

Later, she worked for Warner Bros Music as a manager for rapper Jim Jones. In time she established herself as a star entertainer.

Yandy produced and acted in the short crime drama titled “Two Days in Harlem”, the same year that she co-produced an Off-Broadway musical.

As an entrepreneur, she established a brand ‘Everything Girls Love’ that is now become a lifestyle brand for women. She also publishes a magazine ‘EGL’ that features a variety of topics from wellness, finance, fashion to love.

Furthermore, she plans to publish a series of children’s book and the targeted audience will be working mothers.

In the year 2008, Yandy was recognized as one of Billboard Magazine’s “Top 30 Executives under 30”.

Yandy is also a founder of a mentoring program called ‘Partner Uplifting our Daughters (P.U.D)’. It is a program that targets girls of middle school and promotes literacy and emotional wellness.

She has an estimated net worth of $ 15 Million. As entertainment manager, her estimated average earnings are $64,314 annually.

-On February 3, 2019, Yandy was pepper-sprayed when the VH1 star joined others as they were protested  jail conditions outside the Metropolitan Detention Center, a federal facility in Brooklyn.

-Previously, there were rumors that the marriage of Yandy Smith and her boyfriend Mendeecees Harris are on the rocks.