Yanick Bisson is happily living a married life with Chantal Craig. Craig is a well-named American actress, television content writer, author, and fitness instructor. The couple met for the first time in their high school.

The couple married on 26 May 1990. After her marriage, Chantal changed her name to Shantelle Bisson. Presently, the couple has three daughters named Brianna, Dominique, and Mikaela. 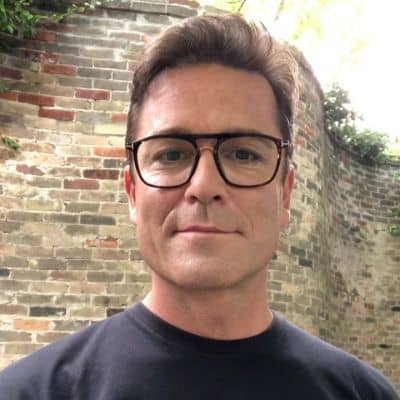 Who is Yannick Bisson?

Yannick Denis Bisson, popularly known as Yannick Bisson is a well-recognized Canadian movie and television actor and director. Bisson is widely famed for his role on Murdoch Mysteries(2008), Anything for Jackson(2020), and Year by the Sea(2016).

Moreover, he has also featured in the Children’s TV The Adventures of Napkin Man.

Yannick Bisson was born on 16 May 1969. At present, his age is 52 years old. Likewise, his birthplace is Montreal, Quebec, Canada.

Not much known about his father and mother’s details, Yannick has been secretive towards his family details. Moreover, he has not disclosed his siblings’ details in the public till now.

Talking about his nationality, Bisson holds a Canadian identity whereas his ethnicity is mixed(French English).

Professionally, Bisson started his career making a debut in the 1984 TV film, Hockey Night. Then, he performed in the flick, by McTeaTogue. Likewise, in 1988, Yannick portrayed the role of Mark Randall in the series, Learning the Ropes. Next year, the Canadian actor starred as a guest star in the show, C.B.C’s Magic Hour and Street Legal.

Yannick then featured in the TV series, Gold. He became a member of the series, High Tides in the role of Joey Barrett in 1994. Later Bisson also performed in the television movie, Young at Heart.

In the year 2008, the famed actor, Yannick became the casting member of Murdoch Mysteries portraying the role of Det. William Murdoch. He was highly admired after his presence in the series and very soon Bisson started getting fame. In the same year, he also performed in the short movie, Nothing Really Matters.

Well, Canadian actor, Bisson has earned a massive amount of money from his multiple profession. He has been actively working in his profession from 1984 till the present.

Yannick has never been part of any controversial matter or rumors till now. The actor has been preoccupied with his professional and private life.

It seems that Bisson prefers enjoying his personal life and does not want to merge it with his professional life.

52 years old star has dashing looks, a muscular and athletic body, and an admirable personality. He stands at a height of 5 feet 9 inches. Also, he has a balanced body weight of 76 kg.

Furthermore, Bisson has light brown eyes whereas his hair is dark brown.

Regarding his social media presence, Yannick Bisson is an active personality on social media. Yannick has more than 54.7k followers on his official Instagram account @yannick_bisson.

He is also active on Twitter with around 33.1k followers.

However, Bisson is also available on Facebook at the moment.