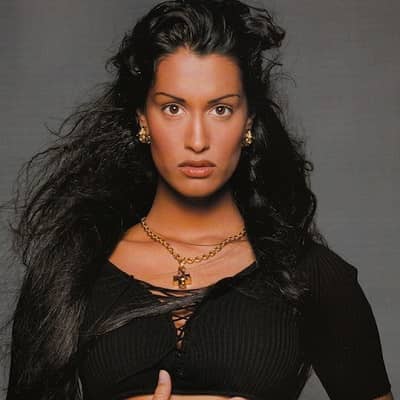 Yasmeen Ghauri is currently married to Ralph Bernstein. She began dating this lawyer in 1996. The couple got married in the year 1997.

They had a daughter named Maia Bernstein and a son named Victor Bernstein now.

Before 1992, she was in relation to Felipe VI of Spain.

Who is Yasmeen Ghauri ?

Yasmeen Ghauri is a former Canadian supermodel. She is one of the Canadian fashion icons who has been credited with upbringing the change in the mentality of the local fashion industry.

In the early and mid-1990s, she walked on ramps across cities such as Paris, London, New York, and Milan for acclaimed fashion designers.

She was born on 23 March 1971, in Montreal, Quebec, Canada. She grew up in Montreal with her parents. Her father, Moin Ghauri is Pakistani and her mother, Linda Ghauri is of German.

She was born into a Muslim family. Ghauri does not have any siblings. She and her parents went for the Islamic Hajj pilgrimage to Mecca at the age of 12.

She holds Canadian nationality and is of German-Asian ethnicity.

The information regarding her education is unknown. Though once, she said that she was bullied by her classmates at school for being a Pakistani heritage.

Yasmeen Ghauri was just at the age of 17 when she takes the step to fulfill her childhood dream of being a model. She was working at a McDonald’s restaurant was discovered by Edward Zaccaria, a Montreal hairdresser, and Platine Coiffure artistic director.

Yasmin gets the chance like that ad started her career. Her parents didn’t approve of her though she pursued her career as a model.

Slowly, her career shifted to the fashion industry. In the year 1990, she was premiered in Milan and Paris. Then she moved to NewYork.

Then Yasmeen was featured in a music video for Elton John‘s song Sacrifice, along with Chris Isaak.

Likewise, she worked with various are fashion companies such as Chanel, Jean-Paul Gaultier, Helmut Lang, and Lanvin after that.

In 1991, she became the face of Anne Klein and Christian Dior. Following year, she had a contract with Victoria’s Secret, becoming a face of Valentino couture and Versace. She walked the annual Victoria’s Secret Fashion Show in 1996.

Ghauri gets retires by stepping out of the Yves Saint Laurent show in 1996 at the last minute and is now settled with her family.

This model is one of the popular models and has decent earnings. She has an estimated net worth of around $1 million US.

In the year, 2008 she receives different rumors that she was dating Sean Combs. Other than this, she is not surrounded by any desperate scandals.

Yasmeen Ghauri stands with a height of 5 ft 10 inches and has a weight of 59 kg. Furthermore, this model has beautiful, dark brown eyes and short, dark brown hair.