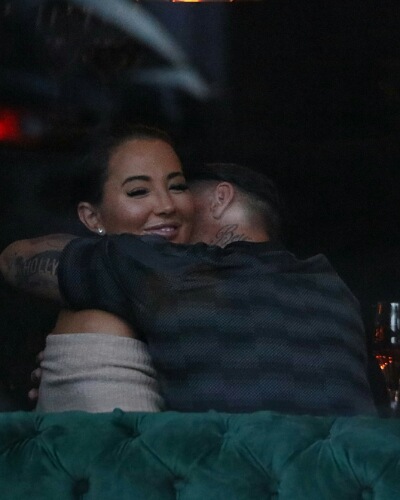 TOWIE star Yazmin Oukhellou and Stephen Bear were spotted on 13 March 2020 embracing each other. Stephen also kissed her on the neck and the two headed for a drink together. People and media speculated that they are dating. But today Yazmin has denied it all and states that they are just friends. More about this special relationship below.

After media outlets posted pictures of the couple,  Yazmin Oukhellou and Stephen Bear hugging each other and going for a drink together, people were sure that they are a couple. But today Yazmin has refused any type of romantic association with Stephen.

Yazmin took to her social media to clear the air. She posted on her Instagram:

“We’re just friends. That’s all. So sad a male and female can’t be friends these days?”

“Yazmin has been so focused on her businesses she just doesn’t have time for a boyfriend right now.

“They’re just very good friends, but are not dating.”

The pictures and scene of yesterday

On 13 March 2020, after Yazmin,  25 completed her shooting for the day, Stephen, 30 came to meet her. She was, closing the vanity van when Stephen came and hugged her from behind. He then kissed her neck.

The couple later headed for a drink together. They were cozy and appeared very comfortable in the company of each other. Stephen wrapped his arms around her several times.

Yazmin was dating James Lock for two years before their messy breakup in July 2019. She claims that he cheated her with several girls in a hotel room during their vacation in Turkey. She was extremely angry and confronted him on it. But James kept denying it and gave various excuses to hide the fact. Later, Yazmin requested one of the girls to tall her the truth. The girl revealed that James had slept with them.

Later, after this split, Yazmin was spotted with Alfie Best Jr. on several dates but things did not work out between the two. James is currently on Celebs Go Dating show and confessed that he did not tell Yazmin that he is participating in it.

Stephen Bear and his relationship

On the other hand, Stephen is a ladies man. He was dating Charlotte Crosby but it was an on-off type of relationship. They confirmed it in February 2017 but in November 2017 had already separated. But earlier this week he and Charlotte had enjoyed a night out together.

Cluck the link ahead for more information on Charlotte Crosby reveals some unknown facts about her loveless relationship with ex-boyfriend Joshua Ritchie!

Though single now, before Stephen had been with many women. Some of these included Georgia Harrison, Lillie Lexie Greg,  and Jemma Lucy. But none of these were successful.

Click the link here to read more on Why is Charlotte Crosby petrified of Stephen Bear? How is her relationship with him going? Learn about it here!