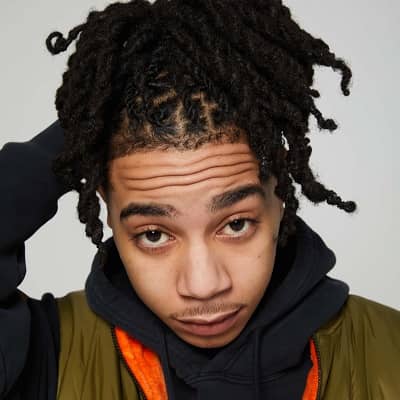 The couple started dating in 2018 and has featured many times on respective Instagram handles. Previously, he was dating Daniela Caseres.

Who is YBN Nahmir?

YBN Nahmir is a well-recognized American rapper, songwriter, and actor. Simmons is widely famed for his singles, Rubbin Off the Paint that listed at number 46 on the Billboard Hot 100 chart, Bounces Out with That that peaked Under Hot 100 Singles chart.

Moreover, he is also known for his songs like Rubbin Off the Paint, Bounch out with That, 2 Seaters, and so on.

YBN Nahmir was born on 18 December 1999. At present, his age is 21 years old. Likewise, his birthplace is Birmingham, Alabama, the USA.

Nicholas was raised by his mother, his cousins, and his auntie. He has been secretive towards his father’s details. Moreover, he has not shared his sibling’s information in the public.

Talking about his nationality, Nahmir holds an American identity whereas his ethnicity is African-American.

Regarding education, the star attended Clay-Chalkville High School. Though he dropped out following the success of Rubbin Off the Paint, he graduated in May 2018.

YBN released his first song on YouTube on 21 March 2015 with YBN Almighty Jay. He released his song at the age of 15 years old. The song, Hood Mentality proved to be a dud and earned no significant views. On 2 January 2017, Nahmir released his first mixtape, Believe in the Glo on SoundCloud.

Additionally, he uploaded his second mixtape on SoundCloud in the same month. On 18 September 2017, Nahmir published his song, Rubbin Off the Paint, on WorldStarHipHop’s YouTube channel. Nicholas then became popular with his singles. The single debuted at 79 and ultimately reached 46 on the Billboard Hot 100.

He came in the light after releasing his new song, Bounce Out With That on Lyrical Lemonade’s YouTube channel. The song was released on 23 January 2018 and gained more than 100 million views on YouTube and listed as number 1 on the Bubbling Under Hot 100 Singles chart.

Nicholas then announced his Europe tour along with his YBN Collective members, YBN Almighty Jay, and YBN Cordae. The rapper also planned to release, YBN: The Mixtape in 2019.

A talented American rapper, Nicholas has earned a handsome amount of money from his profession.

It is reported that YBN Nahmir has an estimated net worth of $1 million. He has featured in several brand endorsements, commercials, ads, tours, and so on.

However, the rapper has not disclosed his exact salary, earnings, and assets details till now.

Nahmir was once involved in a controversy with a past manager after he sold his Rubbin Off the Paint beats. Other than that, he has never been part of any controversial matter or rumors till now.

It seems that Nicholas prefers enjoying his personal life and does not want to merge it with his professional life.

21 years old famed star, YBN has handsome looks and an admirable personality. He stands at a height of 5 feet 7 inches. Also, he has a balanced body weight of 65 kg.

Furthermore, Nahmir has black eyes whereas his hair is black. His body measurement is 38-28-12 inches(chest-waist-biceps) respectively.

Regarding his social media presence, YBN Nahmir is an active personality on social media. – has more than 3.7 million followers on his official Instagram account @ybnnahmir.

He is also active on Twitter with around 159.5k followers. He owns a YouTube channel named YBN Nahmir and it has more than 820k subscribers at the moment.

Moreover, Nahmir is also available on Facebook with nearly 657k fans and supporters.