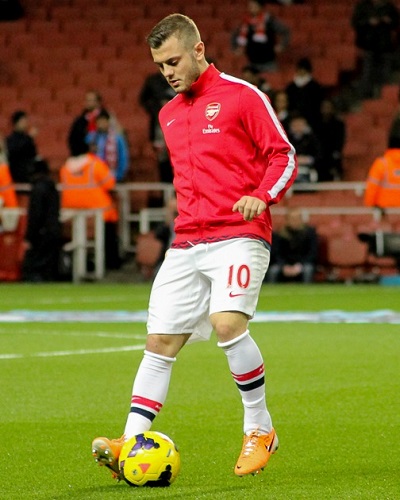 Let’s take a look at the career of English midfielder Jack Wilshere, who is currently on loan to Bournemouth from Arsenal.

He also was injured, and now he has been less effective as compared to the Wilshere of the past. Besides his professional side, we dig deeper into his personal life as well.

Injuries are major setbacks in a professional athlete’s life, and once you are injured, well, it takes quite a toll on your career as the chances of you being the same as before is diminished.

Wilshere is an alum of Arsenal’s youth academy and the thing he learned there was used to really good effect, and he made his first-team debut for Arsenal in 2008 becoming the youngest ever player to debut for Arsenal. Jack was simply 16 years and 256 days old back then.

Throughout his career at his beloved club, he has accomplished a lot and even won the PFA Young Player of the Year award. Jack Wilshere also got selected to the 2010–11 PFA Team of the Year. Not only that, but he has also won the Arsenal player of the month on several occasions.

However, in a career full of glory and highlight, he has also suffered several injuries which have led to the player diminishing in quality. It was during the 2011–12 season when he suffered a stress fracture ankle injury against New York Red Bulls during an Emirates Cup pre-season friendly. Due to that, he was unable to participate in a single club match during the entire season. Jack then returned in the 2012-13 season after being out of action for 17 months.

He came back against QPR and was even crowned the Man of the Match for that very game. He also played at the North London derby against Tottenham Hotspur in its entirety, but his fate was not that good then and he ended up picking another injury which led him to miss the rest of the very month.

Furthermore, back on 27 November 2014, Wilshere was out for three more months following surgery on his left ankle after injuring his ligaments. During the 2015–16 season, Jack broke his fibula during pre-season training in August which initially would have caused him a month out of action, but post-surgery for the injury, he was out for a total of 3 months.

Wilshere has admitted to being frustrated about getting injured on numerous occasions. Furthermore, back on 27 November 2014, Wilshere was ruled out for three more months following surgery on his left ankle after injuring his ligaments in a 1–2 defeat to the mighty Manchester United.

On top of that, during the 2015–16 season, Jack broke his fibula during pre-season training in August which initially would have caused him a month out of action, but following surgery for the injury, he was out for a total of 3 months. Wilshere too admitted to being frustrated with getting injured on numerous occasions.

In 2016 in Bournemouth on a season-long loan during the transfer window, the injury-prone Jack then re-injured his fibula following a clash with Tottenham Hotspur striker Harry Kane over at White Hart Lane that cost him the entire season.

“I’m sad about this injury because Jack is a great player with a great football brain. His career has been stopped by many injuries. At the top level the most important thing is consistency. When a player has been out for a while, the game is of such an intensity that it always takes you a while to get your confidence back”.

“You have to be consistently present. When you look at all the players who are at the top level in the world like Cristiano Ronaldo, these guys play 50 or 60 games a year. They have the luck of not being stopped by injuries. You’re always sad when a guy of Jack’s quality is stopped by problems.”

Also read George Weah: The former Ballon d’Or and Chelsea FA Cup winner continues his legacy as he becomes the president of Liberia

Jack Andrew Garry Wilshere is an English professional footballer who plays as a midfielder for Bournemouth, on loan from Arsenal and the England national team. Wilshere came up through Arsenal’s youth academy and was impressed from an early age. More bio…