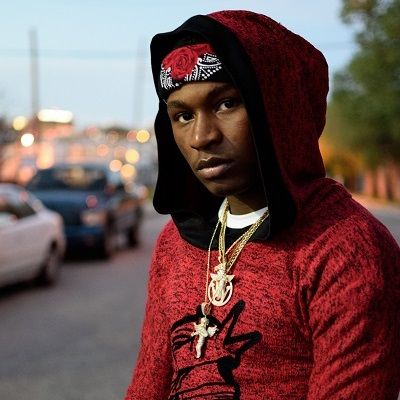 Who is Young Goldie Dating?

The 26 years old rapper is more open about his career and music albums than his personal life.

He has kept his personal life lowkey. The information about his dating and relationship is unknown.

Similarly, he has not been linked with anyone. At present, he is single and not dating anyone.

Who is Young Goldie?

Young Goldie is an American rapper. Not only that he is a multitalented person with knowledge of photography, videography, graphic design, and dancing.

He has released many albums among which “Move For The Money” is his first musical album which was released in the year 2015.

Amin Saddiq Trayvon Peters with the stage name Young Goldie was born on 8th April 1996. His birthplace is Baltimore, Maryland. At present, he is 26 years old. Similarly, he was born to a father (Leroy Peters) and a mother (Hilda Ellison).

Talking about his nationality he is American and he is of mixed(African-American) ethnicity. He attended the local school in Baltimore for his primary education.

Family problems during his childhood

Goldie is not among the people whose childhood was sorted. He had to go through many trouble during his childhood.

His family had some tragic moments at that time. His mother was hospitalized due to her health condition.

Not only that his father was behind bars. His family situation was not well even though he did not give up on his dreams. He managed to participate in talent shows.

Likewise, he participated in school talent shows and local events in his city till the age of 12.

When Goldie was 4 years old, he started having an interest in rap games. At Elementary School he was a member of the independent label “3rd Exit”. His interests made him perform in many local events and talent shows.

Mario Barrett and Los (Carlos Coleman) were his inspiration. Similarly, he was influenced by Meek Mill and Chris Brown.

In the year 2015, he released his first musical album “Move For The Money”. On 4th March 2015, the album was originally released.

On his first album, there were 12 songs which including “Move For The Money”. Just in a few months, his second hip-hop album “Dream Come True” was released. The album was in association with “Austin Music Group”.

Likewise, he appeared on the track “Hatters Goin’ Hate” by Kay Rackz. Some of his other albums are “You The One”, “Super Star”, “I Know It” and many other.

Young Goldie’s Net Worth and income

The estimated net worth of Goldie is more than $1.3 million. He is living a lavish life. He owns a Rolex which costs around USD 55,000. His Rolex is a Rolex day-date 2 presidential Diamond incrusted Watch.

Likewise, he owns the Patek Philippe Nautilus 5711 which costs around $103,000. With huge earnings, he likes spending it on expensive accessories. He has an attraction toward the diamond.

He bought a diamond ring for his mother and gifted her. Not only that he bought a ring for his sister as well. He is fond of cars as well and has a beautiful yellow-colored Lamborghini Aventador.

Goldie has a height of 5 feet 9 inches and has a decent weight.

Likewise, his hair color and eyes color both are black.

Similarly, he has around 5.35k subscribers on his YouTube channel.