Young M.A is an American rapper and entrepreneur. The full form of "M.A" stands for "Me Always." Her birth name is Katorah Marrero. 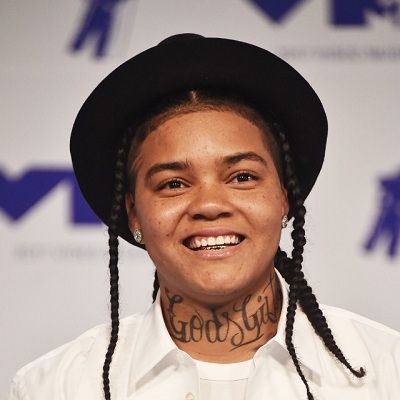 To me, beauty is natural beauty. If you're naturally yourself, you're beautiful

I never wanted to wear skirts or shoes, makeup, nails, dresses, or even wear my hair a certain way. I always wanted to wear sneakers, stud earrings, hair in a ponytail, and play with the boys

We are all people... don't label me as an LGBT rapper or a female rapper... I don't like to be labeled.

Young M.A is at present unmarried and possibly single. It was rumored that she was having a relationship with Tori Brixx who is a model but nothing has been confirmed in 2016.

They were found getting cozy in a Snapchat video post where M.A was giving the model a bite on her cheek and also kissing on her lips. She is not previously engaged.

Katorah Marrero aka Young M.A. is an American rapper and entrepreneur from Bedford-Stuyvesant in Brooklyn. The acrostic in her stage name, “M.A” stands for “Me Always”.

M.A. is 28 years old. She was born on April 3, 1992, in Brooklyn, New York City, U.S. Her father who was sentenced to jail when she was just one, and he remained in jail until she was eleven years old.

Her mother has played a major role in her children’s upbringing. She has an elder brother named Kenneth Ramos.

M.A. lost him in 2009 who was killed in a gang-violence in Pennsylvania. Marrero belongs to American nationality and her ethnicity is unavailable.

When she was 7 years old her mother Latifa decided to relocate to Chesterfield, Virginia. In this school, they were provided with better school facilities.

She mostly scored high grades in school and also involved the football team. There is no more information about her college/school university.

When she was a child, Marrero presented a passion for music. While working at Shake Shack and T.J. Maxx, she began seriously focusing on music as an adult, she self-funded a recording studio with local record producers. She gained a reputation when a Facebook post criticized her song “Brooklyn Chiraq”, a freestyle to Nicki Minaj and G Herbo “ChiRaq”; the song then went viral in 2014.

In 2015, M.A. released a new song, called “Body Bag“, which became a “YouTube hit”, said Rolling Stone, along with the release of her mixtape called Sleep Walkin’. Young M.A released her official debut single, “OOOUUU”, which peaked at number 19 on the US Billboard Hot 100chart in 2016.

M.A’s single titled “Praktice” is supposedly a reference to the idea that her earlier releases have all led up to the full album. Since releasing “Praktice”, in 2018, she has released a multitude of singles, her most recent being “BIG” which was released.

M.A’s estimated net-worth as of 2017 is $ 1 million all from her rapping achievements, her song-streamings and from advertisements and subscriptions on her YouTube account.

There is a dating rumor of Young M.A and Bernice Burgos after both posted Valentine’s Day pictures, in addition to releasing music video.

Young M.A is 5 feet 5 inches tall and a weight of 56 kg. Her eyes are dark brown in color and her hair is black in color. There is no more information about his body measurements.