YouTuber Tana Mongeau is engaged to Bella Thorne! Read about her polyamorous relationship!

Updated On October 21, 2021 | In controversy , Dating , Relationship
Share this 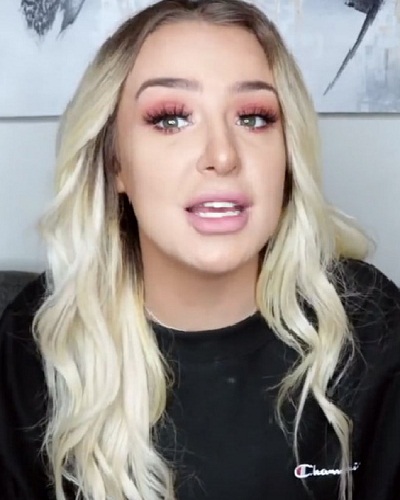 The latest from the camp of controversial YouTuber Tana Mongeau is that her same-sex partner Bella Thorne has proposed to her and she has accepted the proposal.

Tana Mongeau has reached out to her fans via her Instagram story on which she has uploaded a picture of her hand with three rings. The one on her ring finger has the word “Fuck” written on it and done with small white stones. On the picture is written:

Fans were shocked and did not believe it. But later, she retweeted the Instagram story image. This seemed to confirm that the whole thing was not a joke. But fans were confused as well.

The confusion of the fans of Tana Mongeau

Fans had mixed feelings to the post of Tana Mongeau. They were happy, confused, and also skeptical. The confusion arose since Tana Mongeau had recently posted that she wants to remain free for some time. She has released a video in which she said that she did not want to commit herself into anything serious now. She was, also in a happy relationship with Brad Sousa and it was going fine at that front. Then why this sudden engagement with Bella Thorne? People had no answers to the queries cropping in their minds about Bella Thorne and Tana Mongeau whom they lovingly call Tella.

The comments from the fans

Her fans decided to put their feelings and confusion into words and commented to her Instagram post. One wrote:

Another of her fan said:

“THE MOST POWERFUL COUPLE THERE IS. HOLY SHIT.”

One of the social media user expressed:

Tana Mongeau and her relationships and sexuality

Tana has been candid and open about her relationships and sexuality. She and Bella Thorne had been seen kissing each other. She has talked about her polyamorous relationship and said in her post:

“‘I just love who I want to love, If you want to call that pansexuality, you can call me pansexual.”

“I think people need like a box to put people in to feel OK but I’m just not like that. I don’t need a box, I don’t give a fuck [and] I’m just me.”

“I’m going to love who I want to love and I’m going to do what I want to do and I don’t give a fuck who doesn’t like it.”
“If people can’t accept that, then that’s on them.”

Tana had gushed over Bella and said:

“‘She is the most open, honest, creative, raw, self-aware person.”

It is known that when Tana started dating Bella, she was also dating rapper Mod Sun whose real name is Derek Smith. Tana says:

“Being in that relationship taught me so much about myself and polyamory and openness.”

Tana is dating both now: Bella as well as Brad. About Brad she said:

“‘It’s still very, very new, I’m in this new thing with this awesome person. He’s so sweet and he makes me feel those childish butterflies.”

Tana Mongeau is an American YouTube celebrity. She makes videos discussing strange instances from her personal life. Additionally, she is also famous for her Story Time and rant videos. Currently, she has more than 2.5M subscribers on YouTube. More Bio…