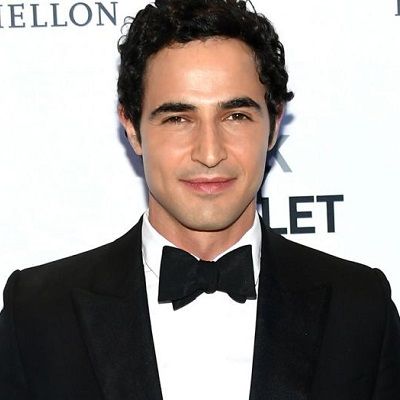 Zac Posen is in a relationship with Christopher Niquet. He is a non-fiction author.

In the year 2008, he released the book Models Matter after spotting supermodel Peggy Moffit at a restaurant.

He lives in the SoHo neighborhood of Lower Manhattan with Christopher and their three dogs.

Who is Zac Posen?

Zac Posen is an American fashion designer. Zac is the winner of the Council of Fashion Designers of America’s 2004 Swarovski’s Perry Ellis Award for Womenswear.

He is best known for his glamorous evening gowns and cocktail dresses.

At present, he shut down his eponymous label.

Zachary E. Posen was born on 24th October 1980 in New York, U.S. He is the son of father Stephen Posen and mother Susan (nee Orzack).

His father is an artist and his mother is a corporate lawyer. He has a sister named Alexandra Posen.

When he was young, he would steal yarmulkes from his grandparents’ synagogue to make ball dresses for his dolls. His interest in fashion design started early.

He attended a private school Saint Ann’s School in Brooklyn. In his sophomore year, he interned with the fashion designer Nicole Miller.

When he was 16-years old, he enrolled in the pre-college program at Parsons The New School for Design in Greenwich Village neighborhood of Lower Manhattan.

In the year 1999, he graduated from Saint Ann’s. He was mentored by curator Richard Martin at The Costume Institute of The Metropolitan Museum of Arts.

He was accepted into the womenswear degree program at London’s Central Saint Martins College of Art and Design at the University of the Arts London in London when he was eighteen.

In the year 2000, Zac Posen got an opportunity to kick start his career. He made his future publicist and event producer Ed Filipowski of KCD through Ingrid Sischy. He offered to represent Zac for free.

Likewise, he returned to New York in 2001 and set an atelier in his parents’ living room. During the time of October, he was chosen to present a capsule collection as part of GenArt’s Fresh Faces in Fashion New York 2001.

His first runway show was in 2001, after which he was courted by fashion titans Yves Carcelle, president of LVMH Fashion Group; Sidney Toledano CEO, and director of Christian Dior S.A.; and Domenico De Sole, president, and CEO of Gucci Group NV.

His designs in Award Functions

In October 2017, he published a 288-page cookbook. His cookbook has 100 recipes inspiring as his designs.

Zac has an estimated net worth of $30 million US. The earning of a fashion designer in America is around $35k – $106k US.

Why did Zac Posen shut down his Fashion Label?

Zac made a surprising and immediate decision of shutting down his fashion label. The reason was that they ran out of time.

The sale was in process and they tried everything possible to find a solution.  But the clock ran out.

He showed his spring collection in September but it will not be shipped anymore.

Zac Posen has black hair and brown eyes. Likewise, he is 5 feet 10 inches tall and weighs around 71 kg.