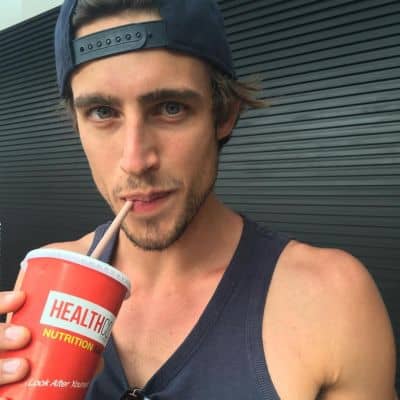 Talking about his relationship status, Zac Stenmark is presently single and he is not dating anyone at the moment. Recently, he was seen kissing Tessa Thompson. Thompson is a well-recognized actress known for her role in When a Stranger Calls, Creed, and Dear White People in 2006, 2014, and 2015.

The prominent actress kissed Zac on Sydney street. Moreover, the duo was seen in an intense conversation and a lovable embrace while holding hands. In the course of their walk, the couple was seen laughing before kissing each other.

Moreover, they have not confirmed their relationship details and status in the public.

Who is Zac Stenmark?

Zac Stenmark is a well-recognized Australian model and actor who has earned fame as one-half of the modeling duo The Stenmark Twins. Stenmark is widely famed for his work on Diamonds Down Under, Australia’s Next Top Model(2005), and Crown Oaks Day(2013).

Moreover, he has featured in ad campaigns for brands such as Abercrombie & Fitch, Calvin Klein, and Ralph Lauren.

Zac Stenmark was born on 16 March 1992. At present, his age is 29 years old. Likewise, his birthplace is Australia.

Zac is the son of his father, Damien Stenmark, and his mother, Susan Stenmark. Moreover, he has a younger brother whose name is Louis and an older sister whose name is Zoe. Also, he has a twin brother, Jordan Stenmark who is a renowned model. His dad is the founder of The Stenmark Organization.

Talking about his nationality, Stenmark holds an Australian identity whereas his ethnicity is Caucasian.

Regarding education, the actor began his agricultural economics studies on AFL scholarships at the University of Syndey. In his leisure time, the celebrity spent time training with the AFL Club and works in a cafe.

Professionally, Zac along with his twin brother, Jordan stepped into the modeling career with an editorial in the French fashion magazine L’Officiel Hommes Paris. The boys then shifted to London for an exclusive meeting with Tom Ford. Eventually, the duo made their international runway debut when they exclusively opened and shut the reputable Calvin Klein Spring 2013 Show during Milan Fashion Week.

Additionally, Zac is widely renowned for his athleticism. He posses a down-to-earth attitude and well-built work ethic. Along with his twin brother, Stenmark possesses a chameleon-like ability to present themselves as a top model for commercial and high-fashion styles.

Going on, the prominent model has featured in a campaign for Abercrombie & Fitch, Ralph Lauren, and Calvin Klein. He has also been in the international editions of GQ, Vanity Fair, L’ Officiel Hommes, Vogue Hommes Japan, Hercules, and The Financial Time’s How To Spend It luxury magazine, on the cover of GQ with Kylie Minogue.

The twins have also starred in a David Jones Summer television commercial, and the brand’s Autumn/ Winter Launch parade opposite to supermodel Miranda Kerr. The GQ Men of Style award-winners also made a contract deal with the Fox television network and featured as mentors on the 10th season of Australia’s Next Top Model.

Rising star, Stenmark has earned a handsome amount of money from his modeling and acting career. It is reported that Zac Stenmark has an estimated net worth of $1 million.

Moreover, his family sold their lavish Mosman estate for a massive $11 million. As per different officials, the family then bought a fabulous mansion with a water view for a cool $7.5 million.

Their home featured gorgeous harbor views from a large balcony. Additionally, Zac left the family home and bought a new two-bedroom apartment in Manly that worth $965,000 in the year 2016.

Zac has never been part of any controversial matter or rumors till now. The renowned model has been preoccupied with his professional as well as private life.

It seems that Stenmark prefers enjoying his personal life and does not want to merge it with his professional life.

Furthermore, Stenmark has blue eyes whereas his hair is brown. His shoe size is 11(US) and his waist size is 32 inches.

The handsome actor has a chest size of 41 inches.

Regarding his social media presence, Zac Stenmark is an active personality on social media. Zac has more than 12.2k followers on his official Instagram account @zac_stenmark.

Moreover, Stenmark is also available on Facebook with nearly 13k fans and supporters.