Zach Braff is an American actor, director, producer, and screenwriter. 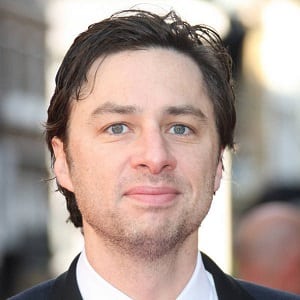 I was kosher until I had my Bar Mitzvah, and I parlayed officially becoming a man into telling my father I wanted to eat cheeseburgers.

I think - not to push this on anyone - that this is the life we have. There is no afterlife and there's no cloud that we get to sit on and read the paper. When I fold that into the search for my own spirituality, I want to seize the day. I want to live each moment. I want to make the most of it, because this is it.

Zach Braff is dating an actress. Her name is Florence Pugh. Recently they made their affair official. Despite their age differences, this couple is spending quality time.

He was previously in a relationship with singer and actor Mandy Moore. They dated for 2 years from 2004 to 2006.

Who is Zach Braff?

Zach Braff is an American actor, director, producer, and screenwriter. People mostly know him for his role as J. D. on the television series ‘Scrubs.’

Additionally, he garnered the nomination for the Primetime Emmy Award for Outstanding Lead Actor in a Comedy Series in 2005 for his appearance in ‘Scrubs.’

His mother was a clinical psychologist and his father was a trial attorney and graduate of Rutgers Law School. Zach has stated in several of his interviews that he had a very strong Conservative/Orthodox upbringing.

He is of American nationality. Furthermore, he belongs to the mixed ethnic background of Ashkenazi Jewish, English, Irish, and Scottish. He has four siblings: Jessica Kirson, Adam J. Braff, Joshua Braff, and Shoshanna Braff.

Zach Braff initially had a minor role in the TV movie ‘High’ in 1989. Additionally, in 1990 he appeared as David Cummings in the TV series ‘The Baby-Sitters Club.’ From 1993 to 2000, Zach had roles in ‘Manhattan Murder Mystery, ‘CBS Schoolbreak Special’, ‘Getting to Know You’, ‘Blue Moon’, ‘Endsville’, and ‘The Broken Hearts Club: A Romantic Comedy.’

Since then, he has appeared in several other movies and television series. All in all, he has over 35 credits as an actor to date.

Some other movies and television series that Braff has appeared in include ‘Alex, Inc.’, ‘The Disaster Artist, ‘In Dubious Battle’, ‘The Sixth Lead’, ‘Undateable’, ‘Inside Amy Schumer’, ‘Wish I Was Here’, ‘Oz the Great and Powerful, ‘The Color of Time’, ‘The Exes’, ‘The High Cost of Living’, ‘The Ex’, ‘Arrested Development, ‘Nobody’s Watching’, and ‘Clone High’ among others.

Furthermore, Zach also has 8 credits as a producer and 9 credits as a director. He is a Democrat who endorsed the re-election campaign of President Barack Obama.

Furthermore, he has won the COFCA Award, Grammy Award, Independent Spirit Award, Pauline Kael Breakout Award, and Golden Schmoes Award. To date, he has 11 wins and 43 nominations to his name for various awards.

Braff’s Kickstarter controversy in 2013 made the news after a financier bolstered budget. Furthermore, at present, there are no rumors concerning his life and career.

Talking about his body measurement, Zach Braff has a height of 5 feet 11 inches (1.82 m). Additionally, he weighs around 86 kg. In addition, his hair color is dark brown and his eye color is blue.

Braff is active over social media.