Zach Eflin is an American baseball player and he is currently the pitcher for Philadelphia Phillies of Major League Baseball. He is in a relationship.

Zach Eflin is currently in a relationship. He is dating Lauren Dennen but the exact date from where they began dating is still unknown. The pair has not shared anything regarding their marriage plan. Also, there are no rumors regarding their separation. 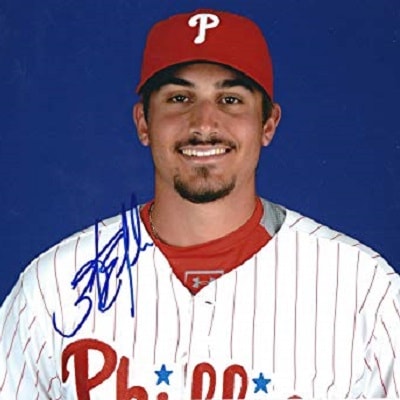 Who is Zach Eflin?

Zach Eflin is an American baseball player and he is currently the pitcher for Philadelphia Phillies of Major League Baseball. He made his MLB debut with the Phillies in 2016.

He was born on April 8, 1994, in Orlando, Florida, USA. His birth name is Zachary Adams Eflin and he is currently 28 years old. He was born to father Larry Eflin and mother Catherine Eflin. He has three siblings: Brittany, Candace, and Ashley Eflin.

Zach holds American citizenship but his ethnicity is unknown.

After completing his high school, he got selected in the 2012 Major League Baseball draft with the 33rd overall by San Diego Padres. Similarly, he received a $1.2 million bonus after he signed the San Diego Padres.

In 2012, he debuted his professional game in the Arizona League and pitched for the Fort Wayne TinCaps of the Class A Midwest League in 2013.

Similarly, Zach Eflin has pitched for Lake Elsinore Storm of the Class A-Advances California League in 2014 and finished the season with 10-7, 3.80 ERA, 93 strikeouts in 128 innings. After that, he was traded to Los Angeles Dodgers and then to Philadelphia Phillies.

Likewise, he was pitched for team USA in the 2015 Pan American Games and won the silver medal and received another invitation to spring training in 2016.

Furthermore, he has played with Reading Fighting Phils, the Lehigh Valley Iron Pigs, etc. He was placed on the disabled list on May 31, 2019, for the 2019 season due to a back injury.

He won Silver medal in the 2015 Pan American Games and was named the Class AAA International league’s Pitcher of the Week on April 18, 2016.

As of 2022, he has an estimated net worth of around $2 million and he has earned that sum of money from his professional career. Also, he earns around $590k as his annual salary. His career has earned him lots of fame and fortune.

Zach has been successful in keeping himself far from rumors and controversies in his personal and professional life.

Zach Eflin has dark brown eyes and black hair. Also, he stands a height of 6 ft. 6 inches and he weighs 98 kg.