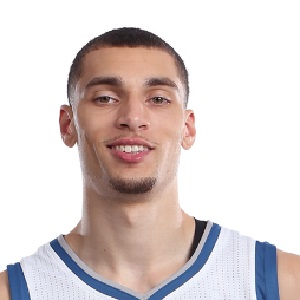 Lunchtime and recess, that was a big part for me growing up. I think it's important for kids to have that

A lot of people I've played with see me as a scorer and a shooter. I'm still fast and everything like that, but then, when they see me dunk, it's like 'Oh, damn

You have to handle adversity well. There are roadblocks you will have to fight through.

Zach LaVine is currently in a relationship. He is dating Hunter Mar. She has a beautiful body and face. They both knew each other since school days. Hunter is an athlete. She has played soccer during her college days.

They are seen together in public places for dinner and lunch. The couple also keeps sharing their pictures on their social media handle.

Who is Zach LaVine?

Zach LaVine is an American professional basketball player. He currently plays as a shooting guard for the Minnesota Timberwolves of the National Basketball Association (NBA). He is a two-time Slam Dunk Contest champion.

He was named Washington State’s Mr. Basketball in 2013 and the AP Washington Player of the Year.

Zach LaVine was born as Zachary LaVine on March 10, 1995, in Renton, Washington, USA. Zach is an American by nationality and he is of African-American and Anglo-American ethnicity.

He is the son of athletic parents Paul LaVine and Cheryl Johnson-LaVine.

Around the age of five, LaVine developed an interest in basketball after watching Michael Jordan in Space Jam. He later became a fan of Kobe Bryant.

He attended Bothell High School in Bothell, Washington. After high school graduation, he enrolled at the University of California, Los Angeles.

He played college basketball for the UCLA Bruins.

He played in the Ballislife All-American Game and won the event’s slam dunk contest.

In 2012, he attended UCLA and played for Coach Ben Howland for the 2013 season. He began his professional basketball career in the year 2014.

On June 26, 2014, LaVine was selected by the Minnesota Timberwolves with the 13th overall pick in the 2014 NBA draft.

He signed his rookie scale contract with the team on July 8, 2014. Since then, he plays for the Minnesota Timberwolves of the National Basketball Association (NBA).

Zach LaVine: Salary and Net Worth

He has an estimated net worth of 3 million dollars. His salary has not been disclosed yet.

It seems he is doing best job without harming others and has been a straight person in his life, for which he has not been in any controversy yet.

Zach has the height of 6 feet 5 inches. His body weighs 83.9kg. He has dark brown hair. Also, his eyes color are dark brown.