Who is in Zach Wilson relationship?

Zach Wilson is currently in a relationship with Abbey Gille, a dancer. The couple are together since High School. The pair are still together and happy now. 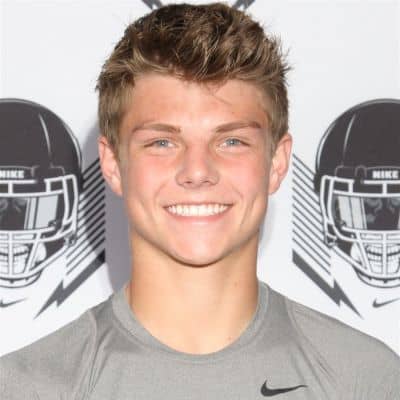 Who is Zach Wilson?

Zach Wilson is an American football quarterback in National Football League. Zach is well-known for the 2020 Boca Raton Bowl Award. Furthermore, he was selected for the 2021 NFL Draft.

Zach Wilson was born on 3rd August 1999 in Draper, Utah to Michael Wilson and Lisa Wilson. His full name is Zachary Kapono Wilson. Besides that, he has 3 brothers and two sisters. However, he holds American Nationality with the Hawaiian ethnicity.

Zach began his football career in High school. During that time, he played as a touchdowns senior. Later, he committed that he will be playing for Boise State University, but he has chosen Brigham Young University (BYU).

At BYU, Zach played as a freshman in 2018. He played a game against Hawai. Meanwhile, becoming the youngest quarterback for BYU. Moreover, Willison received the honor of MVP of the 2018 Famous Idaho Potato Bowl.

Furthermore, Wilson played as a sophomore in 2019. He started nine games, completing 199 of 319 passes for 2382 yards with 11 touchdowns and nine interceptions. During that season, Zach defeated Hawai Cougars.

In 2020, Wilson break the records of Steve Young with 12 games, 3692 pass yards, 33 touchdowns, and three interceptions. He was honored as the offensive MVP of the 2020 Boca Raton Bowl.

Moreover, Zach and Talango Hunfanga were selected as recipients of the 2020 Polynesian College Football Player of the Year Award.

Wilson was selected for the 2021 NFL Draft by the New York Jets. On 29th July 2021, Zach signed a four-year deal worth $35.25 million, along with a $22.9 million signing bonus for a fifth-year option. He debuted against the Carolina Panthers, facing Sam Darnold.

Zach has been honored as the MVP of the 2018 Famous Idaho Potato Bowl. Similarly, he has received the 2020 Boca Raton Bowl award. Moreover, in the same year, Wilson was selected for the 2020 Polynesian College Football Player of the Year Award.

Till now, Zach has not been involved in any kinds of Controversy and Rumors. He has been able to maintain a clean image among the public and the media as well.

Wilson stands at the height of 6 feet 2 inches with a 97 kg. Furthermore, Wilson has blue eyes with blonde hair.