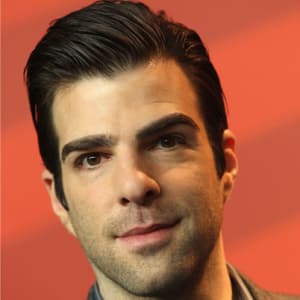 “The interesting thing about my character Sylar is that my strengths as an actor seemed to go completely against the shape of a character in the shadows. I stepped into this character and then realized how much there was to play with.”

Zachary Quinto is currently single. During his announcement of gayness, he was romantically linked to actor Jonathan Groff. He is better known for his role on the popular TV series ‘Glee’. But, they could not give the relationship a proper way and reportedly ended their relationship in July 2013.

Also, he started dating model and painter Miles McMillian in the summer of 2013 and they moved into a NoHo apartment they purchased together in early 2015. The couple was named ‘a power couple whose domain extends across the film, fashion, and art scene’ in November 2015. But, the couple ended their relationship in early 2019.

He also dated actor Colton Haynes in 2009 and had a fling with fashion designer Johnny Wujek in 2009.

Who is Zachary Quinto?

Zachary Quinto is a famous American actor and film producer. He is well recognized for his roles as Sylar on the science fiction drama series ‘Heroes’ from 2006 to 2010. He is also popular for his character Spock in the reboot ‘Star Trek’ in 2009 and its sequels ‘Star Trek Into Darkness’ in 2013 and ‘Star Trek Beyond’ in 2016.

Zachary was born on June 2, 1977, in Pittsburgh, Pennsylvania, USA. Zachary is currently 41 years old. He grew up in the suburb of Green Tree, Pensylvania. His mother’s name is Margaret J. ‘Margo’ and her father’s name was Joseph John ‘Joe’ Quinto. His mother worked at an investment firm initially and worked at a magistrate’s office later. Zachary’s father died of cancer and at that time, he was only seven years old.

He has made history by appearing on the cover of Entertainment Weekly two weeks in a row. Zachary is also a strong supporter of LGBT rights and other causes. He traveled to various states in the support of President Barack Obama in 2012.

After the demise of his father, the loss became one of the major factors in his ambition to succeed as an actor. Zachary started his acting career at the age of 11.

While his stay in Pittsburgh, he performed with the CLO Mini Stars in several local productions like ‘The Wizard of Oz’ and ‘Cinderella’. He continued his passion for acting in his high school also.

Zachary survived a serious car accident at the age of 16.

He joined Saints Simon and Jude Catholic School but the school closed in 2010. Later, he joined Central Catholic High School and graduated from there in 1995. He was actively involved in his high school’s musical and won the Gene Kelly Award in the category Best Supporting Actor. Then, he attended Carnegie Mellon University’s School of Drama and graduated from there in 1999.

After graduation in 1999, Quinto made his way towards California to begin his professional acting career.

He started his carer from the minor television roles which include in the series ‘Touched by an Angel’, ‘Cahrmed’, and ‘Lizzie McGuire’. He debuted his recurring role as Adam Kaufman on the popular drama ‘24’ in 2003 but his role ended after the series the third season in 2004.

His performance in the series led him to land on two additional significant TV roles in the following years. He portrayed the recurring role on the series ‘so noTORIous’ which is a show loosely based on the life of Tori Spelling in which he played the character of Spelling’s best friend, Sasan but the series canceled after only one season.

After that, he made his appearance on the immensely popular sci-fi drama ‘Heroes’ alongside actors Hayden Panettiere and Ali Larter. He portrayed the role of the mysterious villain Sylar and his role led him to superstardom.

During the same time, he was playing for a part in the J.J. Abrams-directed ‘Star Trek’ in 2009, which is a reboot of the acclaimed sci-fi series. After that role, he got numerous opportunities to play in the film and TV.

He became one of the cast in the series ‘Americna Horror Story’ in 2011 in which he portrayed the role of Dr. Oliver Thredson and later in 2013, he reprised the role of Spock for Abram’s ‘Star Trek Into Darkness’.

He was awarded Gene Kelly Award for Best Supporting Actor for his work in ‘The Pirates of Penzance’ in 1994, awarded TV Land Award for Future Classic Award for ‘Heroes’ in 2007, awarded Boston Society of Films Critics Award for Best Cast for his roles in ‘Satr Trek’ in 2009, awarded Elliot Norton Award for Outstanding Ensemble for his role in ‘The Glass Menagerie’ in 2013 and many more awards and nominations.

He has an estimated net worth of around $14 million and his main source of income is from his professional career.

He announced that he was gay in October 2011 after the suicide of 14-year-old Jamey Rodemeyer, who was a victim of gay bullying. He has kept that information secret out of the public eye until Rodemeyer’s death.

Also, he was rumored to be dating his ‘Heroes’ co-star Dania Ramirez in 2008. But, it came into light that he is gay in 2011. And, he was speculated to be dating an actor, Jesse Tyler Ferguson in 2010 but later, they claimed only as good friends.

He has a height of 6 ft. 2 inches and he weighs 83 kg. Zachary has dark brown hair and light brown eyes.