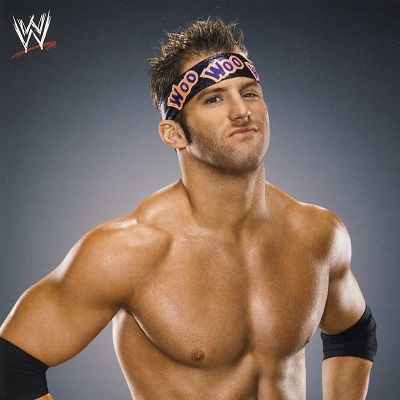 "It was way before The Jersey Shore. I was with Curt Hawkins as the Edge Heads—a long haired blonde kid. And I needed a change. I needed something different. So I just took my real personality, turned the volume way up, cut the hair, went to all the clubs on Long Island, like GLO, and fist pumped with all my broskies until I finally found who I really was, and portrayed it to the world, throwing up the 'LI' hand signal".

Green is also a professional wrestler.

The Zack and Chelsea have been dating since January 2017. They currently live together in Orlando, Florida, US.

Who is Zack Ryder?

He was featured in Sports Illustrated‘s list of the 100 most influential Twitter users in sports in July 2011.

Ryder was born on May 14, 1985, in Merrick, New York, United States.  His real name is Matthew Brett Cardona.

In 2004, Ryder debuted in the field of wrestling from the New York Wrestling Connection (NYWC) using the name Brett Matthews and teamed up with Bryan Meyers (ring name Curt Hawkins) from 2005. They went on to become Tag Team Champions. But later they lost the title to Lo Lincoln and Boog Washington on August 27.

On July 20, 2008, Ryder and Bryan rose into fame after winning the WWE Tag Team Championship. Their victory meant that they were the youngest team to hold the championships after which their individual career took off.

The team split in 2009 and after that Cardona was featured in WWE Television a number of times. After becoming popular after winning the championship, he began using social media as a tool to increase his popularity and fan following. He started a Youtube series called Z! True Long Island Story in February 2011 to promote his character. His status in WWE was thus elevated and he captured the United States Championship.

Not only wrestling, Ryder is also interested in music.

He released his first music single named Hoeski in 2012 which reached the number 92 position in the iTunes Pop Music chart in 2013.

He has brown hair with brown eyes. He is 6 feet and 2 inches tall and weighs around 102 Kg.

You may also know about net worth, early life and body measurements of Paige (Wrestler), Eugene (Wrestler), Dylan Bostic.