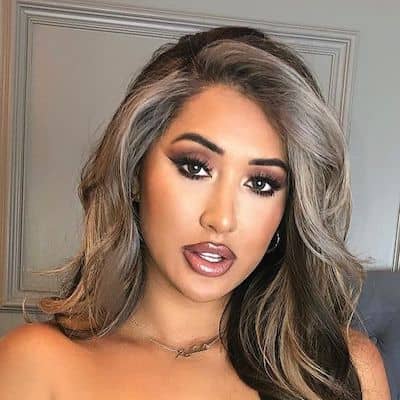 Zahida Allen currently is possibly single. She has not shared the details of her current affair or boyfriend.

But previously, she has dated Scotty T and mynameisjmw. She was also in a relationship with Sean Pratt in 2018.

Who is Zahida Allen?

Zahida Allen is a British model and TV star. The public noticed her for appearing in reality shows like The Challenge and Geordie Shore.

In addition, she is popular on social networking sites.

She was born on 01 June 1994 in Newcastle upon Tyne, United Kingdom. The name of her father and her mother’s name is cloaked.

Zahida’s ancestry is Engish and talking about her academics, she has not revealed the details.

Zahida Allen used to bartend at a club named Please To Meet You. She is now popular as a TV star who has appeared in several competition shows.

She was seen in two seasons of The Challenge, War of the Worlds and War of the Worlds 2. In the first, she competed in five challenges and became safe in four of them. But unfortunately, she lost in the fifth and was eliminated.

On War of the Worlds 2, she quit after the first challenge, Trench Warfare. Moreover, Zahida appeared in Celebrity Ex on the Beach (2017) for a total of 10 episodes. From 2016-17, she was featured in another reality show titled Geordie Shore.

At present, her net worth is estimated at around $500k. Also, she has founded a cosmetics brand named Ohsho Cosmetics.

She has also promoted Boom Bod, HXTN Supply, and Shop by Blue via her social media. However, her salary and other earnings are unknown.

This The Challenge star is keeping herself away from rumors and is also not surrounded by any desperate scandals.

Regarding Zahida Allen’s body features, her height is 5 ft 6 inches and her body weight is 58 kg. Moreover, her eyes are dark brown and she also has long dark brown hair.

She has a fit and toned body but its stats are unknown. On IG she often posts her modeling pictures in two pieces.

Zahida is available on social sites. She has Instagram and Twitter accounts with more than 492k and 86k followers respectively.

She is also active on the Facebook platform with over 8k followers.