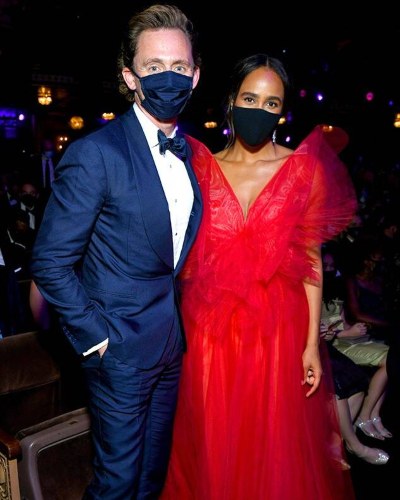 Zawe Ashton and Tom Hiddleston are officially a red carpet couple. They confirmed their relationship with a steamy PDA-filled holiday at the beach in Ibiza earlier on 13th September. Recently, Zawe supported Tom at the Tony Awards in New York City on 26th September 2021.

The award function was held at the Winter Garden Theatre which recognizes excellence in live Broadway theatre as they are presented by the American Theatre Wing and The Broadway League at an annual ceremony in Midtown Manhattan. Zawe wore a red dress for the function while Tom looked handsome in a navy blue suit with crisp white dress shirt and bowtie.

Even though they never publicly confirmed their relationship status they were linked together in 2019 while starring in the West End play Betrayal. It is said that the two have been living together in Atlanta, Georgia. As per sources,

“Tom and Zawe have stayed quiet about their relationship but she has spent the last few weeks with him in the US. They are very well suited and enjoy the quieter side of life away from the glitz and glamour of the showbiz world.”

“Their lives are typically very busy, so spending time together while not working has been ­something they have both embraced. Tom has made a home in Atlanta during lockdown and he is ­expecting to spend the rest of the year there.”

Does Zawe have a husband?

Zawe is not married yet but she has definitely stolen the heart of Tom Hiddleston. The couple seems serious about their relationship even though they are lowkey about it. After attending the award function together for the first time they might be getting into something serious.

Fans are hoping that the two would convert their boyfriend-girlfriend relationship to husband-wife.

Also read Katharine McPhee shared a screenshot of a flirty text from husband David Foster while on a photoshoot!

Zawe is an English actress, writer, and director.

Also, Zawe is best known for her performances in the comedy series, Fresh Meat and Not Safe for Work.

She is also praised for her role in several TV series, including Case Histories, Doctor Who, and Wanderlust. Read more bio…

Drea Kelly aka Andrea Lee on her ex-husband R. Kelly and their children’s relationship!
Tags : Actress Doctor Who