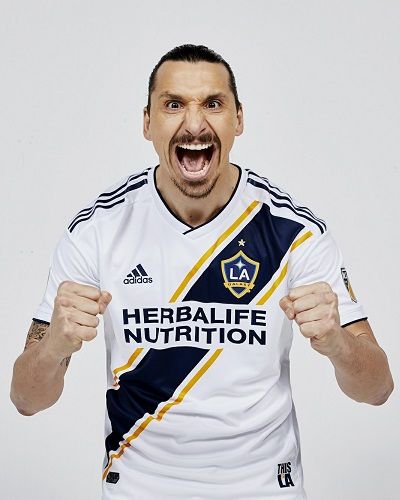 The 36-year-old Swedish international, Zlatan Ibrahimovic has recently left Manchester United to join LA Galaxy. As he signed for the MLS franchise, he revealed how David Beckham convinced him to join the MLS club.

Furthermore, he also said that he will set out to “conquer the US” as he did in Europe, after his transfer to LA Galaxy. Furthermore, his jersey number has also revealed, he is going to wear No. 9.

Talking about the club, he said that he was hugely convinced by the former LA Galaxy superstar, David Beckham. Ibrahimovic said,

“I met David when I played at PSG and he talked a lot about Galaxy and the experience he had in America. He was all positive and said ‘you should go over and try it out. He said everything is fantastic, in progress but to be part of it is amazing and something he was proud of. These words make it easier when you have to choose your next step.”

“This was supposed to happen before but it didn’t, but it is happening now so it is the destiny.”

As per the reports, the former Manchester United striker could make his LA Galaxy debut against city rivals LAFC on March 31.

Talking about his match, he said,

“I think it will be the biggest match during the season, because it is a new team against a big team from the same city. The competition, the rivalry will be there because when two teams come from the same city, one wants to be better than the other one obviously. But I am not worried about this because these games I was born for.”

“After 20 years in Europe playing for the best clubs in the world with the best players in the world, I have been winning so much. It is time to move to a different continent and try the MLS. For me, there was no question about it – Galaxy was the team and I chose them. They didn’t need to choose me.”

After he completed the signing, he posts a video on his Instagram in typically Zlatan style with the caption, “Los Angeles, welcome to Zlatan”.

Now, he is all set to dominate the MLS after decorating his glittering career with various titles. During his time at Manchester United, the Swedish international added three silverware in his beautiful career with 28 goals in 46 appearances. As he won FA Community Shield at the beginning of the season followed by the EFL Cup and UEFA Europa League.

Moreover, he shared the pitch along with United’s legend Wayne Rooney as well as Paul Pogba and Romelu Lukaku during his tenure at Manchester United.

In addition, Ibrahimovic also conquered La Liga in the 2001-10 season with Barcelona and Serie A in the 2010-11 season with A.C. Milan.

Also read “LA Galaxy has just been Zlatan”, Zlatan has marked his sign in the MLS as he scored a brace in the derby including a 36-yard stunner

Zlatan is is a Swedish professional footballer who plays as a forward for LA Galaxy. Similarly, he is well known for his technique, creativity, strength, ability in the air, and his powerful and accurate striking ability. More bio…

Real Madrid have made Chelsea forward Eden Hazard as their major target over Mohamed Salah for this summer where Manchester City are also in the race to sign Hazard
Tags : David Beckham LA Galaxy Manchester United PSG Zlatan Ibrahimovic