Posted on November 13, 2022 | Published By: Gracie Hale | In Child , Pregnant , Relationship
Share this 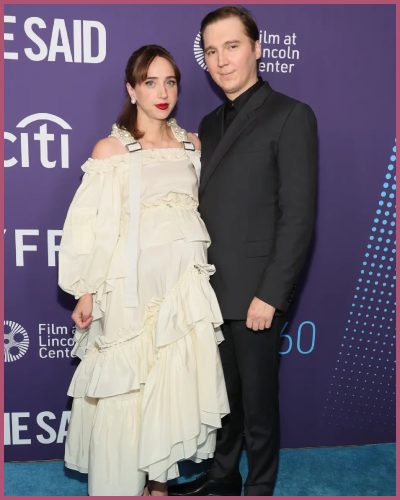 Zoe Kazan, 39, is pregnant with a second child!

The “Plot Against America” alum and her husband Paul Dano are expanding family members as the couple’s second baby is on the way. Kazan gave birth to her first child welcoming a baby girl, Alma in August 2018.

The 39-years-old actress debuted her growing baby bump while walking the red carpet at the Oct. 13 premiere of her film “She Said” in New York City. Afterward, she put her baby bump on display on the cover of Marie Claire’s Power Issue alongside She Said star Carey Mulligan and journalists Jodi Kantor and Megan Twohey.

While speaking with Marie Claire, Zoe opened up about the difficulty of balancing a thriving career with the demands of motherhood.

“Everyone talks about work-life balance, but it’s also really hard to balance your priorities,”

“I wanted to be the person who took my daughter to her first day of preschool, and I couldn’t do that because I felt like this job, this work was as important as that. And vice versa.”

It’s been almost 15 years that Kazan and Dano have been together since co-starring in the play “Things We Want” in 2007. The beautiful couple since worked together on several projects including “Meek’s Cutoff” and “Wildfire”.

Similarly, she went on to connect her experience of being a working mom to the role of Jodi Kantor, 47, who is also a mother of two children.

“I was just really relieved to read a script where that was represented and where I could put that part of myself in there,”

What is Paul Dano best known for?

Paul Dano is an American actor. He is also a director, screenwriter, producer, and musician. He is also associated with a band named band Mook.