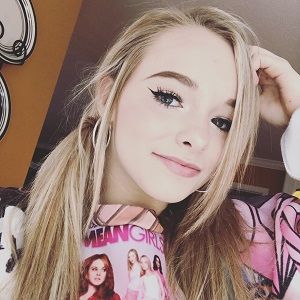 The lovebirds have been also spotted several times in the public and media. Prior to dating Cody, she also dated Zephan Clark. Currently, Zoe and Cody are enjoying their love life and living elegantly.

Who is Zoe LaVerne?

Zoe LaVerne is an American social media celebrity. As a musically star, she currently has over 1 million fan following and more than 92k followers on Instagram.

Zoe was born on June 3, 2001, in the United States of America. Talking about her nationality, she is American and her ethnicity is unknown. As a teenager, she is currently continuing her high school studies.

From the beginning of her childhood, she had a keen interest in music and also began to learn from a very early age.

Additionally, she has also won the coveted musically verification crown in March of 2017. So far, Zoe has won more than eight million hearts on the musically app. Moreover, she is also an Instagram account with more than 92k followers. She has also collaborated with Terin Scottie.

Being a social media star, she earns a decent amount of money from her profession. However, her salary and net worth are unknown.

As of now, Zoe has not won any awards in her career. Although, she has received the coveted musically verification crown.

Zoe is quite active on social media such as Instagram and musically. Currently, she has more than 92k followers on Instagram and over 1 million fans following on musically.