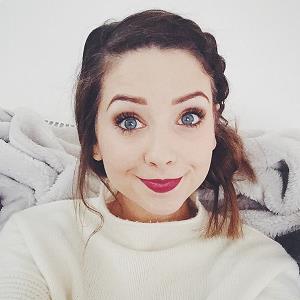 For every sad thing you think of, you should think of three happy things to chase it away

But then I wondered if sometimes our friendships are a bit like clothes and when they start feeling uncomfortable it's not because we've done anything wrong. It just means that we've outgrown them

Holy swoon-gate!' Elliot exclaims when I finally get to the end of my tale. 'If that's what Brooklyn boys are like I'm emigrating as soon as possible.

Cute and adorable Zoella is an unmarried woman and is currently is in relation with Alfie Deyes since 2013. Deyes is also YouTube personality and has made recognizable position in YouTube. Zoella is not associated with other affair status and divorce case yet. They do not have any children.

Zoe Sugg popularly known as Zoella is a famous YouTube personality and fashion vlogger. She is also an author whose debut novel, Girl Online, broke the record of highest sales in the first week. She has made a respectable position in entertainment (YouTube) and the writing field as an author.

Zoella was born to Graham Sugg and Tracey on 28 March 1990 in Lacock, Wiltshire, England. Her nationality is British and belongs to European ethnicity. She was raised with her parents in Lacock in a musical and entertaining environment. She has a brother named Joe Sugg who is also currently a YouTube personality.

As a young girl, she was highly interested in modeling and in fashion. Concerning about her educational background, she attended ‘The Corsham School secondary school and Arts College’.

Zoella’s career, salary, and net worth

After graduation Zoella started working at an interior design company where she created her blog titled “Zoella” in 2009. Soon, she got a thousand followers and more than 500 million visits. Later on, she formed a YouTube channel on the same name (Zoella) on February 2, 2007. She used to show her favorite products, beauty techniques, etc through videos. Later on, she also created a second channel named “MoreZoella” on Sep 4, 2012, which contains mostly her daily activities and vlogs. Currently, her first channel (Zoella) has over 11 Million subscribers and more than 928 million views. Her second channel has over 4 Million subscribers and has total views of 560 Million. Zoella is also an author. Her debut novel named “Girl Online” was released on November 2014 which broke the record of the highest first-week sales. She was also featured in Music “Do They Know It’s Christmas?” (single) in 2014. Zoella appeared on T.V for the first time as a guest panelist on the daytime chat show ‘Loose Women’ in 2014 and also appeared on “This Morning”  to talk about the social anxiety same year. She has won four awards including the ‘Cosmopolitan Blog Award’ in 2011 and 2012, ‘Nickelodeon Kids Choice Award’ in 2014 and ‘Teen Choice Award’ in 2014 and 2015. She was also nominated for the ‘Shorty Award’ in 2016 in the category of ‘YouTuber of the Year’. It is said that she makes $52,000 per month and has an estimated of $3.5 Million.

Once Zoella became a part of rumors when she posted a sexy selfie of herself just wearing underwear. She hasn’t been part of desperate controversy yet.

Her weight is 52 kg and height 5 feet and 4 inches. She has light brown hair and blue eyes. Her body stats are 35-25-36 inches. Her dress size and shoe size are unknown.