Updated On November 24, 2022 | Published By: Abhilesh Lam
Share this
In Relation 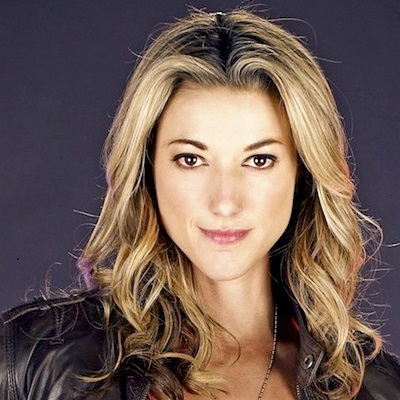 What is the relationship of Zoie Palmer?

Zoie is currently dating TV producer Alexandra (Alex) Lalonde. They were in a relationship since 2011; they were first seen together in Toronto International Film Festival.

They both have a son together from Alex’s previous relationship, his name is Luca Lolande. But recently, there’s a rumor about Zoie and Alexandra breaking up.

Who is Zoie Palmer?

Zoie Palmer is an actress who is half-English and half-Canadian. Palmer is famous for her role in the supernatural drama Lost Girl. There she played the role of Dr. Lauren Lewis.

Her other notable character is Android in the show ‘Dark Matter’, which was released on June 12, 2015, and fans loved it.

She was born on October 28, 1977, in  Camborne, Cornwall, England. Her birth name was Zoie Palmer and she holds British as well as Canadian nationality. Currently, she is 43 years old.

About Zoie’s parents, they are of British and Irish descent. Her mother died while filming JANN season 3.

She has a sister named Tracey (Palmer) Weiler, she was the candidate with the Progressive Conservative Party of Ontario for Kitchener—Waterloo electoral district in a 2012 by-election for the Legislative Assembly of Ontario, and the 2014 general election.

In which school did Zoie Palmer attend?

She moved with her family to Canada when she was nine years old. And then attended Sacred Heart Catholic High School in Newmarket, Ontario. Then in 2001, Zoie received a Bachelor of Fine Arts from York University in Toronto, Canada.

Plamer started her professional experience as an actress at the Red Barn Theatre in Jackson’s Point, Ontario, Canada during her teenage days. Her first work was in Odyssey 5 where she was a researcher.

She then acted in The Scream Team as a Rebecca Kull. In 2003, she appeared in another television film, the biopic “The Reagans”, it was pretty successful and earned multiple Golden Globe Award nominations and several other awards.

After that  Zoie secured the recurring role of Patsy Sawyer in the hit TV music-drama series “Instant Star” from 2006 to 2007. But in 2010 she had her first break in her career she starred in the TV drama series “Lost Girl” in the role of Dr. Lauren Lewis.

Her work drew the attention of many fans and launched her into prominence with a couple of recognition, such as “Best Lesbian/Bi Character of 2013” by AfterEllen.com.

Later she got the role of Haley in the romantic comedy film “The Untitled Work of Paul Shepard” for which Zoie received an ACTRA Toronto Award nomination in the category Outstanding Performance – Female. Her most recent work is ‘Pure’ and ‘Jann’ both released in 2019.

Zoie has been nominated for 2 different awards and has won 2 of them. In 2011, she was nominated for Outstanding Performance – Female in ACTRA Toronto Award for the show The Untitled Work of Paul Shepard.

Later on, in 2012 Zoie won the award for Best Actress in a Feature Film in the Gold Medallion Acting Award. She was then nominated for Best Performance by a Female for the Film Sex After Kids. In 2014 Plamer was awarded Fan’s Choice for Canada’s Screen Star in the Canadian Screen Awards.

What is Zoie Palmer’s net worth?

She is a successful actress who has numerous hit movies as well as TV series. In her professional life, she has earned a decent sum of money. According to sources, her net worth is $2 million (Approx.) as of 2022. Her salary was  $50,000 per episode for the TV series Dark Matter.

There’s news about Zoie’s photos being leaked online through hacked phone on Tuesday (September 3, 2019) and spread across the internet like wildfire.

It is reported that she became the latest celebrity to fall victim to the apparent leaked nude photos scandal. She was also the victim of the internet’s death hoax. Some people on Facebook announced her demise which gained one million likes and freaked her fans.

She is 5ft 6 inches tall and weighs 56kg. Her hair is blonde and her eyes are dark brown in color. Palmer has a slim body and her body measurement is 34-25-35. her bust size is B. She wears a size 9 in shoes and her dress size is 4.

Zoie is pretty active on social media. On Twitter, she has 105.3k people following her. Also, she has an Instagram account where she is followed by 35k people. Apart from that, she doesn’t use other social media.

You may also like to read about the bio, career, net worth of other personalities like Emma Davies, Kate Phillips, Drena De Niro.