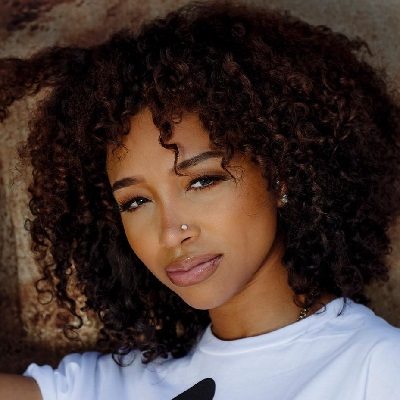 Zonnique Pullins is currently dating the rapper, Bandhunta Izzy. Her boyfriend, Bandhunta is also a rapper by profession.

The couple started dating back in mid-2018. Currently, the couple is expecting their first baby.

Before that, she was in a relationship with the rapper, Zoey Zuko.

Who is Zonnique Pullins?

American Zonnique Pullins is an R&B singer and TV Personality. She is renowned as the former member of the OMG Girlz.

Last, in 2019, she appeared in the TV movie, Three’s Complicated as Lita.

Zonnique Pullins was born on the 20th of March 1996 in Georgia, the United States to Tameka Cottle and Zonnie “Zeboe” Pullins. Her birth name is Zonnique Jailee Pullins. She is of British ethnicity.

Her mother, Tameka is an R&B singer and songwriter. Currently, Tameka is married to the rapper, Clifford Joseph Harris Jr. (a.ka. T.I.).

She has three step-brothers; King, and Major. Also, she has a stepsister, Heiress Diana Harris. All of them are from her mother’s marriage with Clifford.

Apart from that, she has three siblings; Domani, Messiah, and Deyjah Harris. They happen to be children of Clifford from his previous relationship.

Talking about her educational background, she happens to be an alumna of Henry W Grady High School.

Professionally, Zonnique Pullins started her career in 2009 with the teenage girl group, OMG Girlz. Her mother, Tameka formed the group with the other three members; Bahja, Lourdes, and Reginae. In 2010, the group launched the group’s first single, Ain’t Nobody.

Moving forward, in 2011, she went to Scream Tour performed with the artist including Diggy Simmons, Mindless Behaviour, and Jacob Latimore. Through the tour, she earned millions of fans across the country.

On the 28th of February 2012, she released the group’s first official single, Gucci This. The single peaked at the 59th position in Billboard’s R&B/Hip-Pop Airplay.

Moving forward, the group launched the singles including Can’t Stop Loving You, Where the Boys At?, and Boy It’s Over. On the 12th of March 2015, the group was disbanded and pursued her solo career as a singer.

On the 23rd of June 2015, she released her single, Nun For Free under the recording label, Atlantic Record. The single also featured the rapper, Young Thug. The same year, she released the singles like Cool Kids, My Nigga, Worst Friday, and Heartbreak Kid.

Apart from being a singer, she is a renowned TV personality too. In 2011, she made her TV debut with the reality TV series, T.I. & Tiny: The Family Hustle. She appeared in the series till 2015.

Following the series, she appeared in the Growing Up Hip Hop: Atlanta as the main cast. After that, she also featured the second season of the series too. As of now, she is expanding her career as an actress too. In 2019, she made her movie debut with the movie, Three’s Complicated as Lita.

As of 2020, she has an estimated net worth of $600 Thousand. As a singer, her earnings are in the range of $22k to $208k. Besides that, she also makes through the royalties of her albums too.

Zonnique Pullins has black eyes with black hair. However, she prefers to change her hair frequently.

Back in June 2016, she was arrested from the Hartsfield-Jackson International Airport in Atlanta in charge of carrying a gun. The .380 Ruger semi-automatic pistol as detected by the X-ray tech at the security checkpoint. After that, the police took her into custody on the 16th of July 2016.

The pistol was registered on her name. In the matter, she told that she forgot that the gun as in her bag. Later, on the 17th of July 2016, she was released from custody.

On Instagram, she is following the personalities like Jalyn Emil Hall, Romeo Miller, and Jazz Anderson. Also, she is active on Tumblr too.