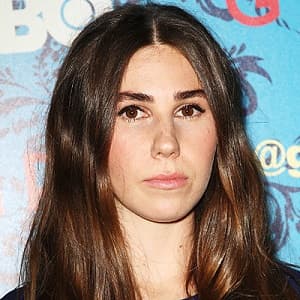 I am an avid reader! As for writing, I might - someday. But we'll have to wait and see.

Comedy arises out of necessity, because some things are so dark that you have to laugh about it.

I have a ship's bed, which totally plays to my obsession of, if I were not an actress, I would be a pirate.

My dad has always been really helpful. He taught me that talent is a bonus, but persistence is what wins out.

The marriage is going strong as there is no news regarding any extramarital affairs. Furthermore, she does not have children from this marriage.

Who is Zosia Mamet?

Zosia Mamet is an American actress and musician. She has appeared in various television series including ‘Parenthood’, ‘United States of Tara’ and ‘Mad Men’ among others. Additionally, she portrays the role of Shoshanna Shapiro on the HBO original series ‘Girls’.

Mamet was born in Randolph, Vermont on February 2, 1988, to parents David Mamet and Lindsay Crouse. Lindsay is an actress and David is a playwright, essayist, screenwriter, and film director.

Additionally, she has a sister, Willa, who is a singer. She became interested in the world of acting since her childhood years. Throughout most of her early life, she grew up in New England and later moved to Pacific Palisades, California. She is of American nationality.

Talking about her education, Mamet attended a strict Christian primary school in California.

Mamet initially made her screen debut with a role in ‘Parallel Lives’ in 1994. Additionally, in 1997, she starred in ‘Colin Fitz Lives!’. Later in 2004, she appeared as Bedouin Woman in ‘Spartan’.

From 2006 to 2007, she appeared as Christine Ross on ‘The Unit’. Since then, she has appeared in numerous other movies and television series. All in all, she has over 40 credits as an actress.

Some other movies and television series that Mamet has appeared in are ‘Star vs. the Forces of Evil’, ‘You’re the Worst’, ‘The Boy Downstairs’, ‘Kate Can’t Swim’, ‘Goldbricks in Bloom’, ‘Unbreakable Kimmy Schmidt’, ‘Regular Show’, ‘Bleeding Heart’, ‘Back to Backspace’ and ‘Off the Ledge’ among others. Additionally, she also has three credits as a producer and 1 credit for the soundtrack. Furthermore, she has a band called Chacha.

Mamet garnered the OFTA Television Award nomination in 2017 for her performance in ‘Girls’ in the category of Best Supporting Actress in a Comedy Series.

Mamet has not revealed her current salary. However, she has an estimated net worth of around $ 3 million at present.

Mamet became part of a controversy after she and her sister Clara brought forward a project and requested $32,000 for a video of their song ‘Bleak Love’. This brought criticism towards the sisters and eventually, after 11 allocated days, less than $3,000 was raised.

In addition, she has over 200k followers on Instagram. Similarly, her Facebook page has more than 7k followers.

Zosia Mamet talks about her pelvic floor dysfunction! What health issue did she face? Find it all here!