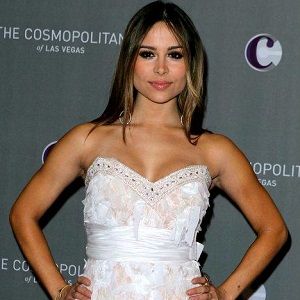 Always be who YOU are, be self-aware, and love yourself tremendously

Heartbreak is essential. We grow, evolve, and learn about the most beautiful thing ever: Love! My first heartbreak taught me that love is supposed to ADD beauty and happiness to my already love-filled life

Latin food is my guiltiest pleasure and my demise. My trainer hates when I go home to visit my mom and her cooking.

What is the relationship of Zulay Henao?

The 38-years-old Colombian-American actress, Zulay is an unmarried woman. Previously, she got engaged to actor Terrence Howard. They started dating in 2008 and got engaged in 2009. However, they couldn’t convert their engagement into marriage and broke up in 2010.

Later, she started dating Joel Rush in 2014. It has been almost four years they have been dating. Furthermore, they have been also spotted in public and media several times. So far, they are carrying their relationship soundly. Currently, Zulay and Joel are enjoying their love life and living elegantly.

Who is Zulay Henao?

Zulay Henao is a Colombian-American actress. She rose to prominence after appearing in the 2007 film Illegal Tender. Some of her notable works include in films Fighting, Takers, Boy Wonder, and Hostel: Part III, The Single Moms Club.

Furthermore, this Colombian actress has also appeared in a couple of famous series such as Law & Order: Special Victims Unit, If Loving You Is Wrong, and Kevin Can Wait.

Zulay was born on May 29, 1979, in Medellin, Colombia. Talking about her nationality, she is Colombian-American and her ethnicity is unknown. Later, she and her family moved to New Jersey. There is not any information regarding her family background.

After completing high school, she joined the U.S. Army and served there for three years. Additionally, Zulay attended the New York Conservatory for Dramatic Arts to study acting.

Zulay began her acting career from the 2005 film Film 101. In the same year, she also appeared as Gloria Rojas in the movie Clearview. A couple of years later, she played various roles in movies such as Illegal Tender, Feel the Noise, and Saturday Morning.

She rose to prominence after appearing in the 2007 film Illegal Tender. Some of her notable works include in films Fighting, Takers, Boy Wonder, and Hostel: Part III, The Single Moms Club. Furthermore, this Colombian actress has also appeared in a couple of famous series such as Law & Order: Special Victims Unit, If Loving You Is Wrong, and Kevin Can Wait.

Additionally, she landed the role of Monica Hatcher in Takers followed by Nikki in the horror movie Hostel: Part III. In addition, she has also starred in several movies including Meet the Blacks, Grow House, Destined, White Space, and a few more. Recently, Zulay has played in a couple of TV series such as Kevin Can Wait and MacGyver.

Being a famous actress, she earns a decent amount of money from her profession. As of 2022, she has a net worth of $1 million.

So far, there are not any drastic rumors regarding her personal and professional life. Moreover, she has never faced any controversy in her career to date. As she has full focus on her work, Zulay has never been involved in any controversial stuff.

Zulay has a height of 5 feet 5 inches and weighs 58 kg. Moreover, she has a pair of gorgeous dark brown eyes and brown hair. Additionally, her other body measurements include 36 inches bra size, 25 inches waist size, and 37 inches hip size.

Also, read the career, salary, net worth, controversy, and the bio of the actress Eline Powell, Becky Rosso, and Daveigh Chase.