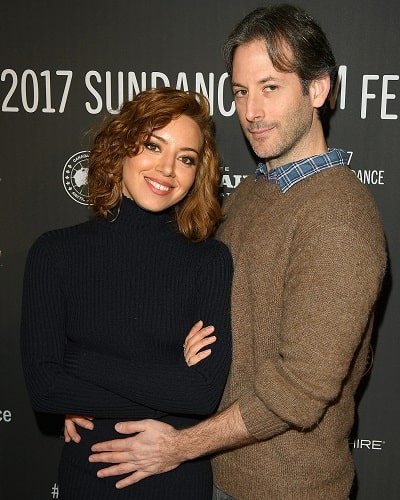 Aubrey Plaza is officially off the market! Aubrey called longtime boyfriend director and screenwriter Jeff Baena ‘my husband’ for the first time on 7th May 2021 on her Instagram post. She confirmed that the two are now husband-wife. But the couple is yet to give out details.

“So proud of my darling husband @jeffbaena for dreaming up another film that takes us to italia to cause some more trouble excited to be reunited with the amazing @alisonbrie (who also co-wrote this one!) and @theofficialsuperstar @sordociego @lauren_weedman and so many more fun people in this. Preparati!”

Their marriage news is not a surprise as they have been together for a decade. They are together with each other since 2011. Likewise, they worked in a number of series while they were quarantining at home in the pandemic. During the time, Aubrey revealed,

“We were quarantined for months and months like everybody else. And we did enjoy it. I think it was, obviously other than all of the catastrophic things happening in the world, just on a personal level, relationship level, was kind of nice to just be forced to be in one place for that long. Could have gone either way, I guess.”

Their relationship has been going well due to their similar profession. They support each other and understand each other.

Also read Tallulah Willis is engaged to Dillon Buss! How did he propose? When is their wedding?

How much is the net worth of Aubrey Plaza?

Aubrey Plaza has an estimated net worth of $6 million as per Celebrity Net Worth. She has appeared in films like Mystery Team, Funny People, Damsels in Distress, Someday This Pain Will Be Useful to You, 10 Years, Safety Not Guaranteed, A glimpse Inside the Mind of Charles Swan III, From Up on Poppy Hill, Best Sellers, Happiest Season, and many more.

Aubrey Plaza is a Comedian and American actress. She is popular for her roles as April Ludgate on the NBC sitcom Parks and Recreation.

Plaza had her first leading role as Darius Britt in the 2012 film Safety Not Guaranteed, after appearing in supporting roles in several feature films. Read more bio…