Charles M Blow is a divorced man. Talking about his sexual orientation, he revealed that he is bisexual in the year 2014.

He has three children, his eldest child is a son, Tahj, and twins: Ian and Iman. Tahj studies at the Yale University, his other two children studied at Middlebury College and Columbia University respectively.

Previously, he was married. However, he has not mentioned the details of his ex-wife and relationship details. He once replied to a tweet saying,

“My ex-wife has lived in at least two of Bloomberg’s heavy stop and frisk neighborhoods. They visited every week. I have two black boys (now young men). Don’t tell me a damned thing about fear. My USA in Bloomberg’s NYC was the living of an ambient terror. Don’t lecture me…sir.” 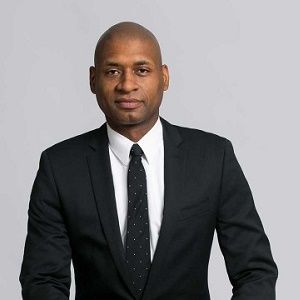 An illustration is a visual editorial - it's just as nuanced. Everything that goes into it is a call you make: every color, every line weight, every angle

What too few people mention when discussing crime is the degree to which concentrated poverty, hopelessness and despair are the chambermaids of violence and incivility.

Who is Charles M Blow?

Charles M Blow is an American journalist, commentator. He gives public opinions and social justice as well. He has been featured in the channels like CNN and MSNBC. Moreover, he is also a current visual op-ed columnist for The New York Times.

Charles has served as a graphics and art director in the channels like The New York Times and National Geographic. He has worked as a writer since April 2008, in The New York Times. Blow has been featured on CNN and MSNBC.

He has also penned a book titled, Fire Shut Up In My Bones, which was published in 2014. During the Donald Trump presidential campaign on CNN, he called Donald Trump a “bigot” and said that anyone who supported Trump is “a part of the bigotry itself.”

Charles’s net worth is estimated to be between $1 Million – $5 Million. However, his salary is unknown through the sources. However, looking at his lifestyle, he seems to have a handsome amount of income.

During his entire career, he always maintained top-notch professionalism over his work. His work was always admirable, and his hard work reflected in how well he did in his career.

Charles’ hair color is black and his eye color is also black. His height, weight, shoe size, etc. are unknown.