Posted by MarriedBiography Posted on April 9, 2021 | In Child , Entertainment , Interesting Facts
Share this 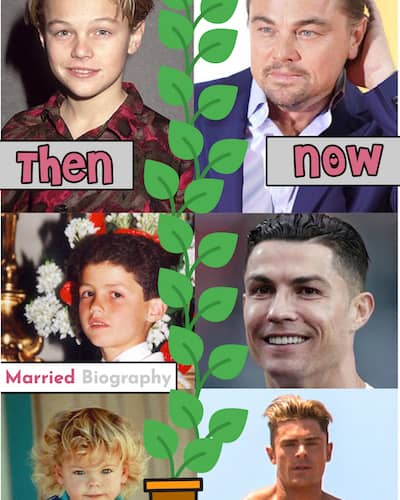 From a cutie back in the days, Shailene Woodley has bloomed out to become a beautiful woman. She recently got engaged to Aaron Rodgers.

The child actress who has turned to a beautiful woman Ashley Tisdale has the same bright eyes she had during her childhood.

Watching ‘Bridgerton’ we all have wondered how Phoebe Dynevor looked like during her early days. So here is the picture of her with her dad.

The TikTok sensation Addison Rae has the same beautiful smile like she did in her childhood.

Baby Justin Bieber has had a drastic change from his early days till his 27 years of life. Here is a picture of him when he was a small baby.

Billie Lourd had the fashion sense since her young days. She looked adorable during her early days and has turned beautiful now.

Hilary Duff has become one heck of a beautiful woman. Here is a picture of her with her sister during her childhood.

The Plus-size Asian Model Yumi Nu had modeling in her genes. She seems exactly similar from her early days to now.

Also read Feet Fetish or Not! Here are 40 celebrity feet you should definitely check out

Nick Jonas has turned from a cute boy to a handsome man who rules on the heart of many females.

The Bollywood Diva Priyanka Chopra became Miss World 2000 from an adorable kid and now is a beautiful wife of Nick Jonas.

The teen-crush Zayn Malik was charming since his young age. Here is a rare picture of his childhood.

The Chinese business magnate Jack Ma has not transformed much from his early days. He looks familiar from his young boy photos.

Cristiano Ronaldo had a drastic change from his childhood days to now. He grew from a cute child to a handsome man.

Lionel Messi was adorable with big bright eyes during his early years and have turned into a handsome man.

The child actor Zac Efron from ‘High School Musical’ has become the handsome hunk of ‘BayWatch’.

The Instagram hottie Kendall Jenner is as beautiful as she was during her childhood. We have seen her growth on TV.

Kim Kardashian has gained a huge fan-following having an amazing sense of style and beauty. Here is a picture of her young years with father Robert Kardashian.

Below is the rare childhood picture of Kylie Jenner. She has grown out to be a hottie.

‘Aquaman’ Jason Momoa was a handsome teen back then and has grown out to be a female heartthrob. Here is a photo of his childhood to now.

The most eligible bachelor Leonardo DiCaprio has a huge female fan following. His beautiful grey eyes are captivating since his childhood.