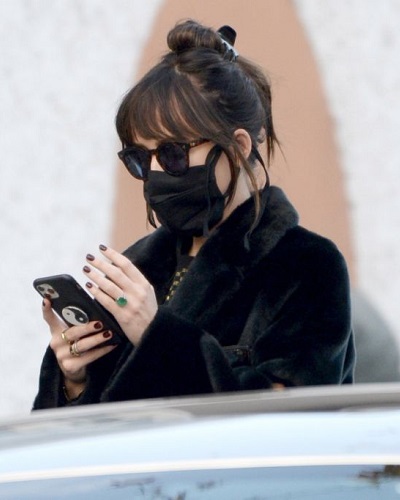 Fifty Shades of Grey actress Dakota Johnson has a new ring on. The actress was seen getting out over the weekend with her large beautiful ring.

She had a green emerald ring on her wedding finger which has made fans curious about her engagement to boyfriend Chris Martin.

As seen in the pictures, Dakota was in a casual outfit wearing a long fur coat, joggers, sunglasses, a face mask, and messy bun hair. For her shoes, she wore loafers from Comme des Garcons x, Dr. Martens. She was on a shopping trip in West Hollywood. Dakota is yet to speak about her ring.

Also read Jordan Wiseley and Tori Deal’s split a year after engagement! Know about their relationship and the early life of Jordan

Dakota Johnson and Chris Martin have been dating each other since October 2017 after meeting through mutual friends. They were spotted in a sushi restaurant in Los Angeles, California.

Again in November 2017, Dakota was seen at the concert, Chris. Similarly, in December 2017, they were seen together at Nick Cave’s concert in Israel.

“They came in and they were really, really nice, like extremely nice. It was a surprise. They sat with Nick Cave, too. I didn’t see them kiss or hold hands or anything like that. They ordered some starters and not a lot of food.”

In January 2018, Dakota and Chris were seen attending various events together in addition to being seen at L.A.’s Soho House in Malibu. Together they arrived at the Stella McCarthy Show and made things official.

Since making their relationship public they started attending various shows and events together. They even went on a double date with Aaron Paul and his wife Lauren.

With them making many official appearances rumors were circulating in October 2018 that the two are having a baby. Similarly, the rumors came after a party including a blue and pink balloon was reported in their house. Dakota made it clear that she was not pregnant. Their relationship is going strong and has kept things lowkey.

Whose net worth is more Dakota or Chris?

In the year 2016, Dakota purchased a home in Hollywood Hills for $3.55 million. Likewise, the house features a four-bedroom and a lap pool.

Also read Who is Brittany Baca? Know about her parents, married life with Joey Logano, net worth, children, biography

Dakota Johnson is an American actress and model. She is famous for her role as Anastasia Steele in the movie Fifty Shades of Grey(2015) and the sequel Fifty Shades Darker(2017).

She debuted in a movie in 1999 sharing the screen with her mother in a comedy-drama named Crazy in Alabama. In 2006, she became Miss Golden Globe. Read more bio…

Keshia Knight Pulliam and Brad James are officially engaged! Know about their relationship and net worth of Keshia
Tags : Actress Fifty Shades of Grey