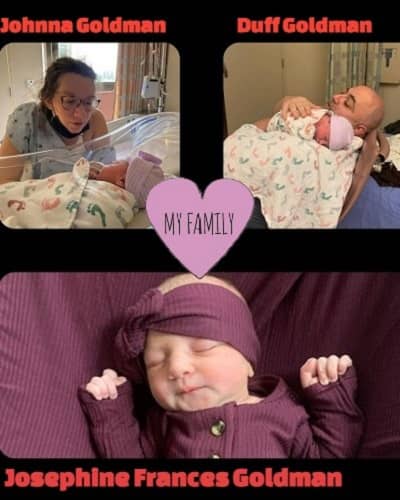 Duff Goldman and wife Johnna Goldman welcomed their first child Josephine on 31st January 2021 after announcing the pregnancy in August 2020 holding a tiny muffin over her stomach. Josephine weighed 8 lbs., 2oz., and measured at 21 inches long. Duff announced the birth of his daughter through Instagram writing,

“I have no words to describe this blessing. @johnnapgoldman and I made a baby! Her name is Josephine and she is the most beautiful thing I’ve ever seen in the whole world.  Some friends have told me that the love I’ll experience when looking at my daughter will be different than anything I’ve ever experienced and they were totally right.”

“I keep telling Josephine about all the wonderful things she’s gonna get to try like pizza and candy and swimming and concerts and riding a bike. She already loves music.”

Duff is very excited about the upcoming child. Talking about Josphine’s first song Goldman said it was I’ll Fly Away by Allison Krauss. He claimed that she likes James Brown, Led Zeppelin, and the Barcelona Gipsy Klezmer Orchestra.

How much is the net worth of Duff Goldman in 2021?

He has appeared in Food Network Challenge, Iron Chef America, Oprah, The Tonight Show With Jay Leno, and Man vs Food. He has featured his work and his shop on the reality television show Ace of Cakes. Read more bio…