Duff Goldman is a celebrity chef. Duff is married to Johnna Colbry and has a daughter with her.

Duff Goldman is married. He exchanged vows with Johnna Colbry on 21 Jan 2019. She is a writer by profession.

However, he proposed to Johnna in April 2018 and they started to date each other in 2016.

Duff and Johnna has a daughter Josephine Frances born in February 2021. The delivery was natural, hence he called his wife natural mother. Johnna revealed that she is pregnant in August 2020. 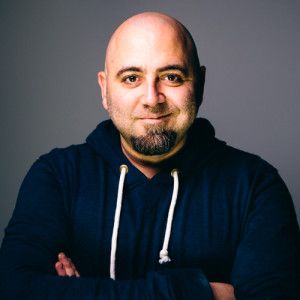 The great thing about cake is it doesn't feel like work. You forget about work. Kids, adults, they all get the same look in their eye when they're decorating cakes... That's the magic right there.

When I got a deposit on my very first cake, I took that deposit and I bought some cake mix with it. I've never taken a loan - ever. And we're doing this expansion just like everything we've done in this bakery as we've grown. If we weren't able to afford paying for something cash, we didn't buy it.

I'm not on a mission. I'm not a paragon of health for anybody. I'm not going to run a marathon or model for 'Men's Health' or go on bike rides with Lance Armstrong. I'm not. Trust me.

Who is Duff Goldman?

He has appeared in Food Network Challenge, Iron Chef America, Oprah, The Tonight Show With Jay Leno, and Man vs Food. He has featured his work and his shop on the reality television show Ace of Cakes.

How old is Duff Goldman?

Duff Goldman is 47 years old. He was born on 17 December 1974 to a Jewish family in Detroit, Michigan. Though his real name is Jeffrey Adam Goldman and belongs to Jewish ethnicity.

When Duff was four his mother caught him in a kitchen where he was wielding a meat cleaver by watching food personality Chef Tell.

While in the second grade he had nearly cut off his pinkie finger while working on a pumpkin. But he knew that he was particularly designed to be in the kitchen. This incident really paved his future pathway as a chef.

While he was 10, his parents divorced and he lived in both Northern Virginia and in the town of Sandwich on Cape Cod, Massachusetts. He was close to both of his parents despite the divorce.

After he graduated from the University of Maryland, gaining degrees in history and philosophy, he further went to study at the Culinary Institute of America in St. Helena. During his college years, he said he used to visit a restaurant in Baltimore where he was inspired to apply as a cook there.

From the age of four Duff Goldman got his instincts to work in the kitchen, he started his first job at a bagel store at a mall at the age of 14.

He then gained several degrees and experience and returned to Baltimore to fulfill his dream, to become a personal chef. He had his turning point when the head chef, Cindy Wolf did not give him a cooking job stating the reason as irreverent experience but rather offered him to make cornbread and biscuits only.

Later he quit his job and started his own shop called Charm City Cakes in March 2000. This baker’s shop was indeed to fulfill his desire of becoming a chef, this shop was rather a platform to showcase his creativity and the right place to follow up his artistic genes in food. He had employed two helper assistants.

They were not experienced in baking or cake making but were experienced sculptors, architects, and painters. With the help of them, he invented unique-shaped cakes like an anatomically correct ear, a smoking volcano, a three-dimensional German Shepherd, and more.

He has been invited to make the cakes for celebrities and also including the former President of the U.S., Barack Obama 2013. His cake was featured in the famous singer, Katy Perry’s music video Birthday.

He also entered The Guinness Book of World Records for baking the world’s largest cupcake on March 30, 2008. Goldman has penned the book named, Ace of Cakes: Inside the World of Charm City Cakes which he wrote with his brother in 2009.

As of 2022, this chef’s net worth is estimated at around $5 million. Moreover, his salary as a chef is around $26k per year.

Somewhere he was rumored of dating his colleague Sofia Rodriguez but it has not been confirmed officially.

There is another rumor about Duff regarding his sexuality, he was rumored to be gay and bisexual.

As we know, he had made a cake for Obama’s inauguration in 2013 but in 2017, a similar-looking cake was made for Trump’s inauguration as well which he did not make. So, there was controversy when he tweeted the pictures of both the cakes and made an implied accusation of plagiarism.

Duff Goldman’s height is 6 feet and his weight is 78 kg. He has an oval-shaped face and a healthy body. He is bald and has a brownish eye color.

Duff is active on social media and he keeps posting about his cake inventions.