Posted by MarriedBiography Posted on November 18, 2019 | In controversy , Interesting Facts
Share this

Less, than a week back, there was this viral news of Narwhal puppy born with an extra tail on his forehead. There was, an initial amazement reaction to it and people expressed their love for the cute little animal. Now the medical fraternity is trying to reach an explanation about the placement of the tail on the puppy’s forehead. Some scientists feel that it could be a less, grown parasitic twin sitting on the puppy’s face.

Narwhal the puppy shot to fame

Less than seven days back, Narwhal-the puppy shot to viral fame when it was revealed by Mac’s Mission dog team that he has an extra tail on his forehead. The tail, to the disappointment of the scientists, did not wag.

It did not hurt the puppy in any way. Besides, there was no bone tissue in it. After the initial investigations, the vets decided to not remove the tail but leave it as it is.

People were thrilled and excited with this amazing product of Nature. Many social media users wanted to adopt the cute little puppy. Many on Twitter even went in to say:

“I would die for Narwhal,”

And now after the storm of amazement and excitement is settling, scientists are wondering about how that tail landed on Narwhal’s face.

Could the tail be a remnant of a parasitic twin?

Margret Casal, Professor at the University of Pennsylvania School of Veterinary Medicine feels that probably the tail is Narwhal’s parasitic twin. Regular identical twins form when an embryo splits into two halves early after fertilization. When this split is asymmetrical, it becomes an extra part on the surviving twin. To provide very her point, Margret shows the little bush of backward-growing fur on Narwhal’s forehead tail.

She feels his suggests the rear end of the undeveloped twin on Narwhal’s face. Identical twins are rare in animals. Margret states:

Some body genes are regulators and controllers who see to it that everything is happening right. Margret adds:

“If you get a mutation in one of those genes then you can get bizarre duplications like two heads. Or, what we see every once in a while in dogs or cats is they can have, for example, two penises.”

Is the tail just an outgrowth of skin?

“At first I thought that it was a bit of clever computer work and not real,”

After a deeper look, he states:

“it looks like some weird outgrowth of skin. Although something so large and strange would be most unusual.”

Michael Levin, director at Allen Discovery Centre at Tufts University has seen a lot weirder things. He is not sure of the origin of Narwhal’s tail. He said:

“There are massive gaps in our understanding,”

He marvels how life forms and develops. He concluded:

“it’s a miracle it comes out right most of the time”. 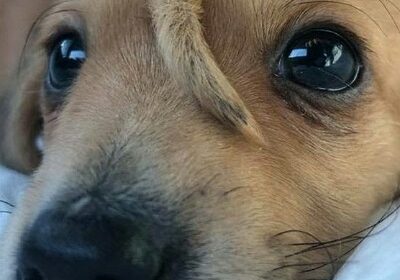 Narwhal-the puppy with an additional tail on the forehead! Does the tail wag and will it grow further?