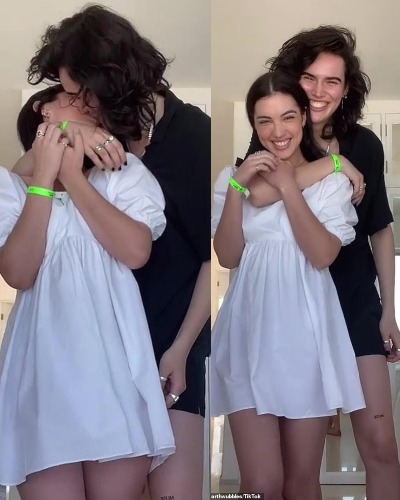 On 29th April 2021, Adelaide made the official announcement of their relationship through a TikTok video of them. In the shared TikTok video, Marthe and Adelaide cuddled up and kissed each other sweetly.

They sang along to the son How You Feel by DJ Scheme and Danny Towers. They seemed very happy and adorable together. Adelaide captioned,

“Surprise shawty! (No one was surprised),”

Marthe also posted a countdown video where she showed her plane journey to meet her lover Adelaide. It is known that they first came across each other a few months ago on TikTok.

Also, read Lesbian Hannah Gadsby is married! Find out about her wedding and wife

Adelaide Kane on her sexuality

Adelaide Kane who dated actor Jacques Colimon and fashion executive, Joey Pauline, in the past came out as bisexual in February 2021 in a TikTok video. In the video, she talked about being nervous to break the news to her friends and family as well as her social media following. She whispered,

Also, read Who is Lisa Cadette Detwiler? Know about her married life with Jim Cramer, net worth, a few must-read facts, biography…

Adelaide Kane is an Australian actress.

She is best known for her roles as Lolly Allen in the Australian soap opera Neighbours and Cora Hale in the third season of MTV’s Teen Wolf.

She is also famous for voicing the character Queen Mala in Dragons: Race to the Edge since 2016. Kane is also popular for the portrayal of Mary, Queen of Scots in Reign (2013-2017). Read more bio…

Who is Marissa Mowry? When did Marissa and Trevor Lawrence marry?
Tags : Model Social Media Star