An Italian footballer player, who plays as a striker for Serie A club Brescia and the Italy national team. 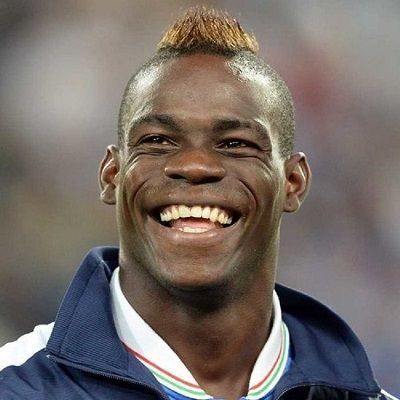 for England to remain in the competition they need Italy to win both their remaining matches against first Costa Rica and then Uruguay] If we beat Costa Rica I want a kiss, obviously on the cheek, from the UK Queen.

What is the relationship of Mario Balotelli?

Mario Balotelli was in a relationship with Raffaella Fico in the past, but it did not end well. She later claimed that she was pregnant with Mario’s child. Fico gave birth to her daughter, Pia, on December 5, 2012.

Additionally, in February 2014, DNA tests confirmed that Pia was Mario’s daughter. Moreover, Mario got engaged to Belgian model Fanny Neguesha in March 2013. However, the couple parted ways in September 2014.

Who is Mario Balotelli?

Mario Balotelli is an Italian footballer player, who plays as a striker for Serie A club Brescia and the Italy national team. Likely,  Mario began his career as a footballer with ‘Lumezzane’ and made his senior debut at the age of 15. In April 2006, he made his debut in the ‘Serie C1’ league.

In the year 2007, he finally joined ‘Internazionale,’ but his two-year-long association with them was plagued with disciplinary issues, which had him getting suspended from the first team in 2009.


Mario Balotelli was born on  August 12, in the year 1990, in Palermo, Italy. His birth name is Mario Balotelli Barwuah and he is currently 32 years old. His father’s name is Thomas Barwuah and his mother’s name is Rose Barwuah. It was later revealed that Mario’s biological parents had opted for foster care because of a life-threatening illness that had affected Mario as a kid.

They could not afford expensive treatments for Mario. Whereas, the Balotelli family came ahead with support when Mario’s parents needed it the most. When Mario grew up, he had the option to go back to his biological parents but refused to do so, saying that he hated the fact that they had abandoned him as a kid.

Talking about his profession, he made his competitive debut for ‘Lumezzane,’ against ‘Padova,’ in a ‘Serie C1 match. He had grown into a highly competitive player by then and tried to play with better clubs. He also scored twice in a friendly contest with ‘Sheffield FC,’ which was also one of his early matches for the team.

The head coach of ‘International’ was miffed with him for this reason. In addition to that, Mario did not get any relief from the frequent racist chants that were directed at him during most of his matches.

Likewise, he kept getting into trouble over his antics on the field. The fans were angry and tried to lay their hands on him once the game was over. He then made his ‘Premier League debut in October, in a 3–0 defeat against ‘Arsenal’ on their home ground.

Despite remarkable performances on many crucial occasions, Mario’s aggressive behavior on the field caused a lot of trouble for him. His team managers decided to let him go once the 2011–2012 season ended.  Manchester City ended up winning the title for the first time since 1968.

Premier League and Net Worth ($80M)

However, his performance worsened after his stint with ‘Milan’ ended. For the 2014–2015 season, he signed with the ‘Premier League team ‘Liverpool,’ and in the 16 appearances that he made for them, he ended up scoring only one goal.

In 2016, ‘OGC Nice’ announced that they had acquired Mario from ‘Liverpool.’ Struggling with disciplinary troubles that refused to end, Mario performed rather well. He has represented his senior team in the 2013 ‘Confederations Cup’ and the 2014 ‘FIFA World Cup.’

As of 2022, Mario Balotelli has an estimated net worth of around $80 million and he has earned that sum of money from his professional career.

There was a rumor that Mario Balotelli has made up his mind about the next club. Currently, he is far from rumors and controversies.