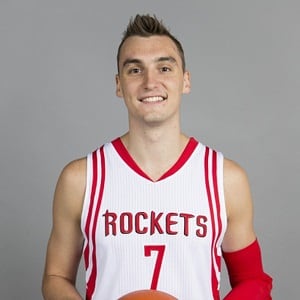 Be Where Your Feet Are

What is the relationship of Sam Dekker?

Sam Dekker is a married man. He married American Sports Reporter Olivia Harlan on July 14, 2018. The pair were previously engaged in May 2017. Olivia is the daughter of NBA announcer Kevin Harlan. Their marriage is going strong as there is no news regarding any extramarital affairs at present.

Who is Sam Dekker?

Sam Dekker is an American professional basketball player. Currently, he plays for the Los Angeles Clippers of the National Basketball Association.

Previously, he played college basketball for the Wisconsin Badgers. Additionally, he got selected with the 18th overall pick in the 2015 NBA draft.

Dekker was born in Sheboygan, Wisconsin on May 6, 1994, to parents Carol and Todd Dekker. Additionally, he has two older siblings, John and Hannah.

His father was his coach at Sheboygan Lutheran and hence he was interested in the world of basketball from an early age. He is of American nationality. Furthermore, his ethnic background is Caucasian.

Talking about his education, Dekker attended Sheboygan Lutheran High School. In addition, he also attended the University of Wisconsin-Madison from 2012 to 2015.

Dekker initially became the Wisconsin Gatorade Player of the Year following his senior season. He led his school to its first-ever WIAA state title. In his college career, he played in 35 games as a freshman on the Wisconsin Badgers. Additionally, in his sophomore year, coaches named him in the Second Team All-Big Ten.

Coming to his professional career, after signing with the Houston Rockets, Dekker missed the entire 2015 NBA Summer League after suffering a back injury.

Dekker was acquired by the Los Angeles Clippers on June 28, 2017. He was also on the under-18 United States national team in 2012.

Dekker became part of a controversy after his controversial white pride statement on Twitter that he posted in 2018. Furthermore, there are no rumors concerning his life and career at present.

Talking about his body measurement, Dekker has a height of 6 feet 9 inches. Additionally, he weighs around 99.8 kg. Furthermore, his hair color and eye color is dark brown.