Updated On November 17, 2022 | Published By: Alisha Ghram
Share this
Married 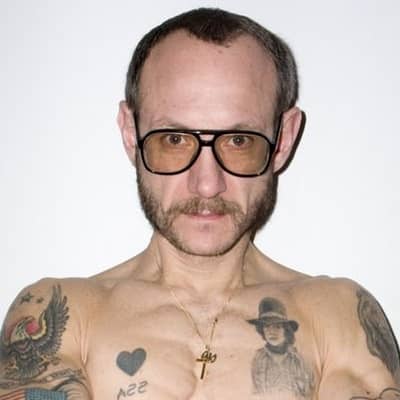 What is the relationship of Terry Richardson?

Terry Richardson is married to his longtime assistant Alexandra Bolotow.

The couple tied the knot in 2017 at a private ceremony in Taos, New Mexico. They first met each other while Alex was working as an intern at Terry.  The duo is now blessed with twin boys Roman and Rex.

Richardson was married to the model, Nikki Uberti in 1996. They were together for three years and get a divorce in 1999. Nikki had breast cancer and the man began to take drugs which led to their divorce.

The photographer dated Audrey Gelman from 2010 to  2013. Likely, he also has a relationship with Susan Eldridge in 2003.

He had a relationship with a model and actress Shalom Harlow in 1999. Their relationship lasted for 3 years separating in 2003.

Who is Terry Richardson?

Terry Richardson is one of the popular and well-known American fashion and portrait photographers.

He is part of various high-profile events and has also worked with a lot of well-known celebrities.

His mother, Norma Kessler was an actress and dancer in Copacabana and Bye Birdie nightclubs.

Likely, his father’s name is Bob Richardson who was a fashion photographer.

Bob struggled with schizophrenia and drug abuse and sadly died in 2005.

His parents get separated when Richardson was five years old. Afterward, he moved to Woodstock, New York, along with her mother and stepfather, English guitarist Jackie Lomax.

Richardson is of mixed descent Irish and English.

In which school did Terry Richardson attend?

As he said that he often fought, skipped classes, and was an uncontrollable and rude teenager.

Terry gets his first job as a photography assistant with Tony Kent. Tony was then a well-known photographer and also the friend of Terry’s mother.

Working there, he learned about photography. He there worked with various photographing campaigns for brands such as Hugo Boss, Gucci, Dolce, and Gabbana.

No sooner he was the photographer clicking the well-known celebrities’ photos with Lady Gaga, Miley Cyrus, Will Ferrell, Megan Fox, and NBA star Kobe Bryant.

He photographed Barack Obama in 2007. In 2012, Terry create his first exhibition in Los Angeles, California.

Likely the same year, Lady Gaga, an American singer also stated that Richardson would be creating a documentary about her life.

Richardson even has his own photographic books like Too Much, Hong Kong, Mom & Dad, Son of Bob, and Hysteric Glamour including Terryworld and Kibosh.

As of now, Richardson remains at the forefront of fashion photography and has published books of his work, including Terryworld and Kibosh.

How much is the net worth of Terry Richardson?

The photographer has a net worth of around $8 million as of 2022.

He is one of the highest-paid photographers and reportedly earns $1 million as his annual salary.

Richardson has been into various controversial news. He has been frequently cited for manipulating young women while their shoots since 2001.

Likely, many have also described Richardson as a “sex addict” and drug abuser.

Richardson has even publicly responded to these allegations. He stated that they were all false ad he conducts only respectable collaborations.

Marc Jacobs and model Noot Seear have also come to his defense. They said that he does not pressure his models and that he treats everyone who works with him with respect.

Richardson was under investigation by the New York City Police Department’s Special Victims Squad in relation to multiple sexual assault allegations in the year 2018. The investigation is still ongoing.

The photographer seems to be fond of tattoos and has many of them around his body. He has light brown colored hair and eyes.