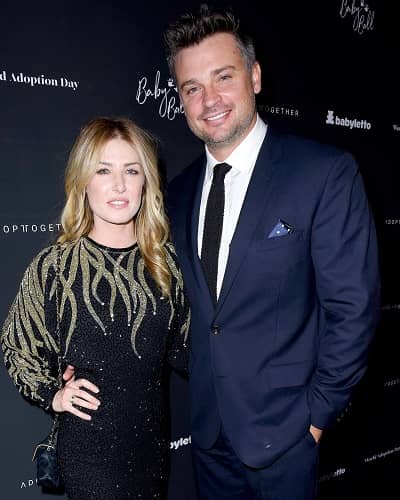 Tom Welling and her wife Jessica Rose Lee expecting their first child. They are expecting their second child. Tom revealed the news of the birth of the child with his costar from the CW Superman series, Michael Rosenbaum.

He has not disclosed the due date or the gender of the upcoming baby. Rosenbaum shared about it on his Instagram and wrote,

“Welling shares a secret don’t miss this week’s @insideofyoupodcast with the man himself @tomwelling,”

“She told you, you lying bastard! But you do! You have another one coming. You have little Thomson, he’s the cutest little — you know, there’s nothing more infuriating than when beautiful people have beautiful children.”

Tom Welling and Jessica Rose Welling walked down the aisle on 30th November 2019. They married at the Sunstone Vineyards & Winery in Santa Ynez, California after 5 years of being together. Tom wore a crisp white tuxedo jacket for the western-themed wedding where guests sported custom cowboy hats.

His bride Jessica Rose Lee wore a strapless gown with elbow-length gloves. Her white gown had a fitted bodice with layers of tulle beginning at her waist.

Jessica tied back half of her honey-hued hair into a dark blue ribbon and let wispy tendrils frame her face with curls cascading down her shoulders.

Her look was created by Carissa Ferreri and she used Armani’s Lip Maestro Velvet in 415 along with Charlotte Tilbury liner in Hollywood Honey.

Likewise, Tom looked amazing in a black bow tie as he flashed his new gold wedding band for a shot. The venue was lined with chandeliers at the top of the plastic tent. They welcomed their first child Thomson Wylde Welling on 5th January 2019.

Tom Welling is an American actor, producer, director, and model who is best known for his role as Clark Kent in the drama ‘Smallville’ from 2001 to 2011. Read more bio…